The editorial board claimed that, "For decades before the law was changed, the system mostly benefited the handful of law firms that specialize in workers' compensation cases. The system was a huge burden on Oklahoma businesses, which saw their annual workers' comp rates rise through the years, even as the number of claims filed by injured workers decreased." 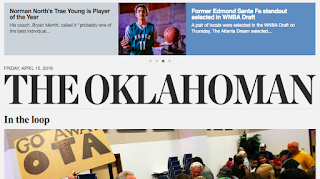 Advising that the state's legislature should probably take up revising it's attempt at reform sooner than later, the opinion exclaims, "In the end, though, the high court may force the
system back closer to the old status quo. As with lawsuit reform measures, the workers' comp decisions affirm the notion that legislative fixes never end a problem. They only seem to reveal another series of problems. In this case, the empire has struck back with a vengeance. The winners could be injured workers, to be sure, and their lawyers. The losers? Everyone else."

Submitting letters to the editor is limited to 250 words, and certainly I had  more to say about this editorial than 250 words would allow. Regardless, the following is my reply. I do not know if the editors published it.

While not from Oklahoma, I am founder and CEO of WorkCompCentral, a specialty media firm for the workers' compensation institution. We are neutral to any side other than to advocate for a healthy work comp program as it is an essential underpinning to the modern economy.

I appreciate that the editorial board, and perhaps the general population of Oklahoma, may be frustrated with the legal dismemberment of the 2013 reform, but let's be clear on one thing: if a law violates a state's constitution then it is not good for ANYONE.

Oklahoma certainly has had its share of workers' compensation frustration, but abrogating citizen's constitutional rights will not solve anything. Back to the drawing board? Perhaps.

But, you erroneously propose that the winners are injured workers and their lawyers, and that the losers are "everyone else."

There are about 3.9 million people in Oklahoma. Each and every one of them that works could be injured on the job at any time.

Work comp is not about just "injured workers and their lawyers." It is about every single citizen contributing to the economy, i.e., your "losers." Everyone loses when their constitutional rights are destroyed...
Posted by Unknown at 3:51 AM