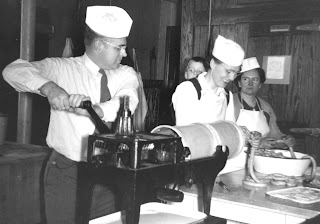 When the sausage that we call legislation is made it is subject to a quality control process. The ingredients get tested to make sure that everything is wholesome and has some nutritional value.

QC is performed by the courts. The tough part about legislative QC is that it takes real people with real cases butting against The System to get the testing done.

Someone has to get hurt to initiate legislative QC.

Lots of people have been getting hurt and performing QC in Oklahoma, and yet another declaration that the sausage isn't made of wholesome ingredients was declared by that state's Supreme Court yesterday.

There are a myriad of provisions in the 2013 Administrative Workers' Compensation Act that offend the sensibilities, but none worse, I think, than the revocation of permanent disability indemnity if the injured worker returns to work.

The Oklahoma Supreme Court sees it that way too.

AWCA Section 45(C)(5) also impermissibly "creates a subclass of employees subject to differential treatment" depending on whether the employees were able to return to work, the court said.

In addition the court said that disability from injuries to "scheduled members" cannot be determined through the use of the 6th Edition of the American Medical Association's “Guides to the Evaluation of Permanent Impairment.”

But the bigger part of the ruling is the court's disdain for disparate treatment among workers with regards to permanent partial disabilities.

The court said Section 45(C)(5) was unconstitutional. That statute provides that the amount of a worker's PPD award shall be reduced by 70% of the average weekly wage for each week he works in his pre-injury or equivalent job.

The court's rationale is that injured workers have a vested property interest in an award of PPD, and "these benefits replace something the employee lost for which the employer is liable." But with Section 45(C)(5), "the monetary award based on the physical disability rating to the employee's body becomes meaningless once the employee returns to work," as the statute allows for the award to be depleted if the claimant works long enough.

The court further said there was no valid reason to treat workers who are able to go back to work differently than workers who cannot.

Two justices dissented in part, on the grounds that if one provision of the AWCA is unconstitutional (indeed, it's turning out that much more fails QC testing) then the entire act is because everything is interwoven.

In other words, like a Federal Food and Drug Administration enforcement act, the entire batch of sausage needs to be recalled.

By the way, one commentator to the WorkCompCentral story on the case said that the "employers who are effectively held at gunpoint by the attorneys throughout the state at the mere 'claim' of a workplace injury" are the big losers because attorneys are paid contingent on the amount of disability.

To read the dissent, click here.
Posted by Unknown at 4:09 AM