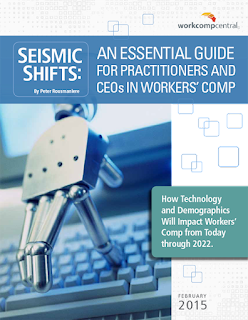 I was talking with Michael Standing, CEO and president of AIM Mutual Insurance Company out of Massachusetts - preparing a guest spot for the Seismic Shifts presentations last year.

("Seismic Shifts: An Essential Guide for Practitioners and CEOs in Workers' Comp," was a special WorkCompCentral report prepared by Peter Rousmaniere last year that investigates commercial opportunities in a shrinking workers' comp industry.)

California, by contrast, has almost 39 million people, a gross written premium of nearly $16.5 billion, but only 218 carriers, many of them sub-carriers or affiliates of larger companies, so the real number of carriers is even smaller.

What's wrong with this picture?

In 1993 "open rating" became the new business model in California. Before the open rating law, all workers' compensation insurance had to meet a minimum pricing standard. In other words, there was a floor on rates - insurance companies could not quote or charge less than what the Department of Insurance said could be charged.

I've ranted before about this.

Before open rating, there were well over 350 insurance companies. They competed on quality of service, the experience rating modification factor (aka "ex mod") being the determining distinction between carriers - the better serviced claims, the lower the ex mod, the less expensive the insurance.

The opposite has occurred - it has, to the great detriment of the policy purchasing employer population completely stifled competition.

And worse, has focused the industry incorrectly on cost containment rather than quality performance.

At least that's MY opinion.