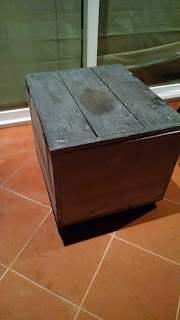 A few years ago my wife came home from the local building materials charity store with a large wooden box. It has a hinged lid, and caster wheels. We painted it, lubed it and put all of our grill accessories in it.

The grill box is very functional. It holds the charcoal, lighter fluid, incendiary device, fire extinguisher and a couple of other nic-nacs necessary for a complete grill experience. Utensils and other cooking paraphernalia (such as the requisite glass of wine) can be placed conveniently atop the lid while cooking.

The box stays outside, so it gets weathered and requires periodic maintenance. It had been a while since any had been done though.

Cleaning and lubricating the grill box was one of those projects that just kept moving down the priority list.

It's a very easy job. Tighten up the screws and oil the lid hinges, flip the box over and lubricate the caster wheels.

But for whatever reason, every weekend, I'd have that nagging feeling that I forgot to do something. I'd ponder. I'd ask my wife. We couldn't remember.

Maybe the job was so trivial, perhaps it was so easy, or just too small in relation to all the other, bigger, household projects that its insignificance left no impression on the memory.

The California Supplemental Job Displacement Benefit is sort of like my grill box - apparently it's one of those things that is easy to forget, but just takes a little maintenance.

The $120 million annual fund that was created at the last minute by the legislature to get SB 863 passed was based on a Rand Corp study that estimated there were about 24,000 people who would qualify and benefit from this supplemental fixed payment of $5,000.

Injured workers are eligible for the voucher if the employer does not offer re-employment within 60 days of the treating physician or evaluator declaring the applicant to be permanent and stationary, and issuing a report outlining job restrictions.

The benefit replaced a voucher program that had graduated levels of benefits based on disability but was too complex to administer.

Consequently, if Rand's estimates are correct, there are 20,005 injured workers who received a voucher before April 13, 2015, but will not be eligible to apply for payments after Wednesday because of the time limit.

Either the Rand estimate was too high, or the availability of the supplemental payment isn't well advertised, or....?

“While 8 CCR 17303 required claims administrators to provide notice of eligibility via a cover sheet accompanying all vouchers issued until the voucher form was amended by DWC, the department has been informed that at least some vouchers issued prior to Dec. 1, 2015, were not accompanied by the required notice,” the DIR said in a statement.

Rules that went into effect when the program launched in April 2015 require an injured worker to apply for payments from the fund within one year after receiving the Supplemental Job Displacement Benefit voucher, or one year from the effective date of the regulations.

So the Division of Workers' Compensation is contemplating extending the deadline to one year from the date of receiving the updated voucher form, or one year from the effective date of the amended regulations for those who received vouchers before Dec. 1, to apply.

The state has a very nice, easy explanation of the benefit in Chapter 8 of its guidebook for injured workers. There are other notices that are to be issued that explain the benefit's availability.

Whether these publications are absorbed by the recipients is another matter of course.

I think what's really going on is that the supplemental benefit is just another layer of complexity in an already overly complex system. Another detail to attend to when so much is already going on ...

Truth be told though, the legislature should just take that money and revise the permanent disability indemnity benefit instead. That's a matter for another day.

This weekend I tightened up the hinges and put oil on them as well as the wheels. It's in tip top operational shape now and I used it to grill up a tasty rib eye steak for dinner last night!

The DWC might do some maintenance to the supplemental benefit program. It has scheduled a hearing on extending the deadline to apply for the benefit is at 10 a.m. April 15 at the Elihu Harris state office building, 1515 Clay St., in Oakland.

I don't think they're serving steak though.
Posted by Unknown at 4:37 AM