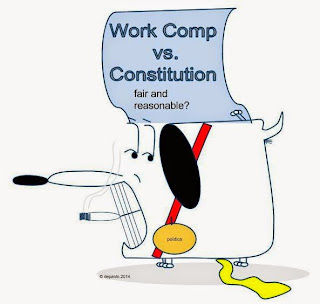 Just yesterday I posted about Texas attorney fees and the debate in that state about adequacy.

And I previously I opined that 2016 was the year of Comp versus Constitution.

The Florida Supreme Court yesterday blended the two, finding that state's reformed attorney fee provisions, a product of changes made in 2003, to be unconstitutional under both the Florida state constitution and the US Constitution in the Castellano v. Next Door case.

In Castellano, the ultimate hourly fee attributable the work of Castellano's attorney amounted to $1.53 per hour because Florida Statutes Section 440.34 limits attorney’s fees to a sliding scale based on the amount of benefits obtained.

Even I made more than that as a law clerk in my first legal job during my second year of law school ($4.25 per hour...).

Strictly adhering to statutory law, Castellano had no ability to challenge the reasonableness of the $1.53 hourly rate, and both the judge of compensation claims and the 1st District Court of Appeals were precluded by Section 440.34 from assessing whether the fee award—calculated in strict compliance with the statutory fee schedule—was reasonable.

While the court acknowledged that the statutory fee schedule could, in some cases, result in a constitutionally adequate fee, it concluded that the irrebuttable statutory presumption of adequacy was unconstitutional because the fee cap applied to all injured workers regardless of circumstances, consequences or reasonableness: "the statute presumes that the ultimate fee will always be reasonable to compensate the attorney, without providing any mechanism for refutation."

EVERY injured worker is precluded from challenging the reasonableness of a fee is what irked the court.

The Castellano Supreme Court addressed only attorney fees, but dicta in the court's 55 page opinion suggests that, given the right set of facts, it would find other provisions unconstitutional (the court declined to entertain a facial challenge to the entirety of Chapter 440, revoking its grant of review and discharging its jurisdiction by way of a two-paragraph order in Stahl v. Hialeah Hospital yesterday as well).

"Yet, while the Legislature has continued to enunciate this purpose [expediency delivering benefits]," reads the opinion, "in reality, the workers’ compensation system has become increasingly complex to the detriment of the claimant, who depends on the assistance of a competent attorney to navigate the thicket. Indeed, as this Court long ago observed, allowing a claimant to 'engage competent legal assistance' actually 'discourages the carrier from unnecessarily resisting claims' and encourages attorneys to undertake representation in non-frivolous claims, 'realizing that a reasonable fee will be paid for [their] labor.'”

This theme is restated by the court several times in the opinion:

"The statute prevents every injured worker from challenging the reasonableness of the fee award in his or her individual case—an issue of serious constitutional concern given the critical importance, as a key feature of the workers’ compensation statutory scheme, of a reasonable attorney’s fee for the successful claimant."

And, "Stated another way, the statute establishes a conclusive irrebuttable presumption that the formula will produce an adequate fee in every case. This is clearly not true, and the inability of any injured worker to challenge the reasonableness of the fee award in his or her individual case is a facial constitutional due process issue."

Whenever someone has something that someone else wants, there's going to be disputes. Workers' compensation is no different.

The way we handle disputes in our civilization is through litigation. In workers' compensation, most of the time, it is an administrative court system. But there are still rules of procedure. And the substantive law isn't simple any longer either. Reading, interpreting and communicating a legal position takes particular skill - that's what lawyers are for.

When one is injured or ill the faculties for reading, interpreting and communicating, even if it is one's own fate, and even if one is a lawyer, are all compromised.

The payer side of the bargaining table knows this - defense attorney fees in key states have grown exponentially, particularly as compared to those representing injured workers.

Until one needs a lawyer.

The big concern from the Castellano opposition is that the ruling will cause insurance rates to increase significantly by encouraging legal participation. But there's a flaw to that logic.

Lawyers are only needed if there's a dispute.

So, either stop creating disputes or concede when a dispute arises.

Some will say it's not that simple.

Email ThisBlogThis!Share to TwitterShare to FacebookShare to Pinterest
Labels: florida