An episode of Reno 911 has a department psychologist taking officer mental healthy inventories. Each officer character in the cast is interviewed, and of course the satire is barely acceptable for prime time networks, but satirically accurate to experience.

For instance, Lt. Dangle asks when he will get the results of the evaluation, and the psychologist responds that it's not that kind of evaluation, and that, "It's mainly just there in the file so that if something happens we can just go and look at it and say, 'Yep, we should have seen that coming!'" (2:56)

Doesn't this remind you of the present day obsession with "compliance" and documentation - for no other purpose, it seems, other than to say at some point later down the road, "Yep, we should have seen that coming!" 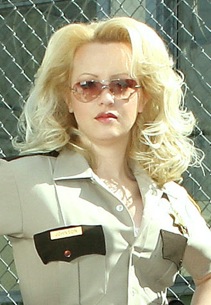 Or when Deputy Travis Junior is asked by the psychologist, "Have you ever considered suicide?" Junior says, "No, but I did shoot off a toe once as part of an attempt at workers' comp fraud. The argument was that it wasn't fraud because I was actually missing a toe, but, ah, the department didn't see it that way." (11:23)

Well, that workers' compensation reference is quite obvious. Perhaps it's why the psychologist told Lt. Dangle the for the evaluation ... should have seen that one coming.

And Deputy Trudy Wiegel talks about her addiction to prescription medication, admitting to what we like to call in our world, "doctor shopping".

Psychologist: "Has a doctor prescribed all these medications for you?" Wiegel: "I have several doctors." Psychologist: "You have several different doctors... Are they aware of one another?" Wiegel: "You mean, do they all exist in reality?" Psychologist: "That wasn't one of my questions, but I'd love to know..." Wiegel: "One of them I met on the Internet, so I haven't actually seen her certificate. I have several kinds of doctors, sometimes they get confused. I just came from the podiatrist and he had me take my top off. You never know what the doctors are going to ask you what to do these days! He took one boob and he threw it around like a pendulum and said he was checking my cholesterol..." (17:40)

This is the kind of professional behavior that guidelines and utilization review were designed to squelch.

After Wiegel told the psychologist that the "podiatrist's" office was a van, he said, "This is not part of the evaluation, just some friendly advise - I'd highly recommend you not go back to that podiatrist."

Wiegel responds like many who believe that the patient/physician relationship, no matter how toxic, is sacrosanct: "You know what, I don't really want to say, 'mind your own business...'"
-PAUSE-
"...Okay...," the psychologist capitulates.

There's a lot in work comp that is considered sacrosanct. The injured workers' relationships. Exclusive remedy... mind your own business ...

The protection against civil liability found in the exclusive remedy that employers enjoy has expanded through the years to nearly any vendor providing services or goods to the injured worker on behalf of the employer.

First it was the insurance company, because the employer cedes all control on a claim to the carrier via law and contractual relationship. Then it was the doctors, because without medical intervention provided by the employer there could be no treatment to the injured worker. And so on, down the workers' compensation food chain - anywhere a vendor touched an injured worker, or his file, the veil of exclusive remedy seemed to protect aberrant behavior.

In King v. CompPartners, the court said that an injured worker could potentially assert a viable tort claim against a utilization reviewer for failing to warn about the potential risks associated with the withdrawal from psychotropic medications.

The court did not address whether the scope of the doctor's duty encompassed an obligation to advise Kirk King about what could happen if he wasn't weaned off his medication – it just said King should have been granted leave to amend his complaint to clarify whether this was the conduct for which he sought to hold CompParters liable.

The whole issue of exclusive remedy protection trickling down to providers is sort of like the dialogue between the psychologist and deputy Clementine Johnson:

Psychologist: "Have you ever considered suicide?"

P: "I guess I have to ask the logical follow up question, have you ever considered suicide for someone else?"

P: "Under what circumstances would you recommend suicide?"

P: "Your co-worker, Trudy Wiegel, Deputy Wiegel. You have recommended that she kill herself?"