Applicant attorney Keith More asked the 800 or so attendees to our panel session at the California Applicant's Attorneys' Association conference Friday for a show of hands: how many had utilization review requests denied based on lack of, or missing, records? (LC 4062(g)(4))

Every person raised a hand. Every single one.

And that didn't count the overflow rooms where our session was broadcast via television to about 300 other attendees.

Sure the crowd represented outliers - litigated cases; less than 20% of all workers' compensation responsible, however, for more than 80% of all system costs.

Truth is, that observation should make one really cringe. 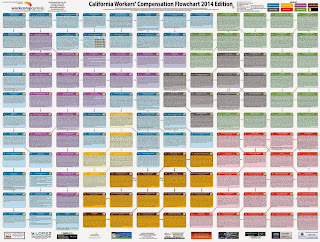 After all, if the system can't comply with the law to ensure relevant medical records get to the reviewing physician when the injured worker has someone looking out for them, then what about that majority who have no idea what's going on, probably don't understand the UR process, and likely aren't savvy enough to realize that the utilization review isn't complete?

We don't know how many treatment requests are denied, ultimately, on lack of records, because there's no process in place for capturing such information when workers with or without an attorney are involved.

So while California administrators may be pugnacious in defending statistics favorable towards UR (and IMR) reducing medical costs, the truth is that no one REALLY knows because the vast majority of workers' compensation claimants - the unrepresented - aren't polled or studied.

It just may be that medical treatment savings are simply the product of people just giving up and going away.

The system is obsessive about costs. I'd like to say, let's forget about costs. After all, our cost neurosis is what gets workers' compensation into trouble in the first place.

But we can't. There's only so much to go around.

Costs are important, of course, for budgeting. Budgeting is a necessary discipline anytime there is income and expense to account for. Someone along the chain of financial resources is going to demand an accounting and want to know why something is the way it is.

That makes sense. Money goes in, and money goes out, and someone, somewhere, has to be responsible to make sure that the flow of money is going where it is supposed to.

Also along the chain of financial resources are people. Some are benefactors. Others are recipients.

This is America, after all, and the world of workers' compensation falls within the ambit of a capitalist economy, which means along the chain of financial resources there are people that want or must be paid some of that money in order to make things happen the way they are supposed to happen.

Some overstate their value to the system, some understate it, and some don't care what their value is as long as they get a piece of the action.

The point is that there is no reason why there should ever be any lack of documentation to a reviewing physician, other than someone's decision that there's too much paper to copy, too much to mail, too much to review... too much cost in the process.

Editorial decisions on medical records are made by someone along the way to UR; editorial decisions that, in effect, becomes the practice of medicine ... illegally I'd say, if not done by a medical doctor or other professional recognized by the law as authorized to provide medical care and advise.

Without an adequate, accurate, and complete medical history, any medical decision or determination that follows is subject to challenge. Challenge is another word for dispute, which is what causes "friction."

There's a simple legislative or regulatory fix to the inadequate medical records issue - mandate that all medical records be supplied to the reviewing physician and that failure to do so results in automatic approval of the requested treatment subject to disapproval upon subsequent receipt and review of records (if not too late by then).

In other words, remove the word "reasonably" from Labor Code section 4062. That word is subjective, and one person's reasonable is not another person's.

Whenever there's the possibility of subjective evaluation, there's the probability of dispute. So why do we insist on inserting subjectiveness into a process that clearly requires objectivity? And why do we allow non-medical professionals to editorialize on medical records?

If the reasons are all about costs, then we're not looking at the whole picture.
Posted by Unknown at 4:51 AM

Email ThisBlogThis!Share to TwitterShare to FacebookShare to Pinterest
Labels: California, treatment, UR