One of my wife's dear childhood friends grew up to be a local cop. If you met her it'd be obvious; she's a tough lady.

Cathy really likes police work, particularly on the street. She likes dealing with people, even those of criminal intent. Her passion is keeping the streets safe, thugs where they belong, and making peace in the face of threats. 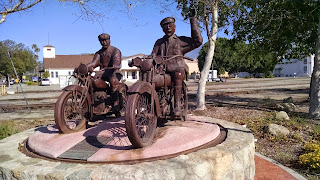 And of course cops get hurt on the job. That's what they do.

When cops get hurt on the job it kills them to be taken off the streets, but they have to heal, and police departments don't want to risk further injury to their primary assets, the police officers.

It's part of the job, and those injuries are compensable under workers' compensation schemes. Departments don't like it because such events wreck havoc with budgets, but that's police work.

Cathy's original foray into workers' compensation challenges started a couple years ago with a knee injury incurred wrestling a thug to the ground and the ensuing altercation. Ultimately that knee injury required surgery and many months off work.

Eventually Cathy returned to modified duty behind a desk, which is a typical placement for injured officers. While in that position Cathy engaged in strengthening and rehabilitative exercises, cleared by her treating physician, on her own without reimbursement request or other interference from work comp, so she could get back on her normal beat.

Return to the streets; at 50-something years old, one doesn't just put on the duty belt and hop in the squad car - after physical rehabilitation the fitness for duty test is required before the department puts one of its own back into the danger zone.

It was during the fitness for duty test that Cathy sustained a new injury to her groin (I don't know the specific diagnosis). According to her treating physician, surgery is indicated, but the claims administrator is disputing the treatment request.

And this is where the 2015 Word on Work Comp gets implemented - Mistrust.

Because the third party administrator for the department has, like most claims systems, red flag alerts in its systems and procedures that call up certain services, like investigation.

I doubt the claims examiner on Cathy's case intends harassment or intimidation, or even to create this air of mistrust - but when someone is lurking outside your residence, which is in a gated community, following and taping her at the gym while engaging in the aforesaid physician recommended rehabilitative exercises, or is intently following you on Facebook, watching every post to see if there is any mention of engagement in physical activity contrary to stated disability status ....

It's bad enough that the tone and volume of paperwork sent to Cathy as mandated by California law and regulation is threatening and overwhelming, but add to that the personal intrusion by investigative services and it's very obvious why a legitimate injury incurred by a highly credible and (perhaps, now, formerly) dedicated employee seeks the assistance of counsel - because her trust in the fair and compassionate treatment of her case has been compromised.

Litigation involves a minority of claims - generally less than 20% in most states. Yet, litigated cases comprise nearly 80% of all claim expenses.

Why, then, does the industry push claims into litigation?
Posted by Unknown at 4:01 AM

Email ThisBlogThis!Share to TwitterShare to FacebookShare to Pinterest
Labels: litigation