Every quarter or so, WorkCompCentral publishes a special report on the institution of workers' compensation.

I say "institution" because I believe that workers' compensation is not just an industry, or a program, or even a system, though it does encompass all of those elements.

Workers' compensation is an institution in the grandest sense - available to everyone and anyone that qualifies, with defined boundaries, rules, limitations...

Dictionary dot com defines "institution" as: "an organization, establishment, foundation, society, or the like, devoted to the promotion of a particular cause or program, especially one of a public, educational, or charitable character."

That pretty much defines workers' compensation no matter what your participation level is - worker, employer, vendor, government. 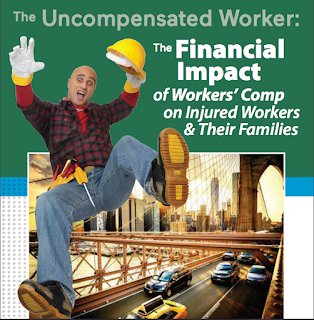 The institution of workers' compensation is constantly studied. There are lots of formal research organizations telling us what costs whom, where the dollars go, what the effect is.

Not too many look at the long term financial effect on the injured worker and his/her family when a lost time injury takes that person out of the productive work force.

WorkCompCentral released yesterday our independently commissioned study by Peter Rousmaniere on the topic: "The Uncompensated Worker: The Financial Impact of Workers’ Comp on Injured Workers & Their Families.”

This is the first report we know of that explores the risk of family instability while an injured worker recovers, and the conclusion is startling - an overall declination in the earnings of that worker to the detriment of the lifestyle of that workers' entire family, taking a large swath out of the recurrent economy.


This report examines a fictitious worker, Tim, that we would find any day anywhere in the USA - an electrician - who incurs a lost time work injury with attendant disability and indemnity.

"In 31 states, workers receive a reduction in take-home pay of 15% or more when they're injured on the job," the report concludes, "and in half the states, households with two median wage earners, one on work disability and the other working full time, cannot afford to sustain their basic budget."

Bottom line finding: regardless of indemnity, the financial impact on a regular middle class American of modest means (certainly not poverty level) is financially ruined for the rest of their lives regardless of domicile…

I, and my company, WorkCompCentral, may be criticized by the "payer" community for being too liberal, for pandering to injured workers.

So be it. This report does not take a position, but simply points out a fact: in general, getting hurt while working can mean an irreversible lowering in the standard of living for most of the population, and this has serious consequences for that worker, his/her family, the employer, the local community and the larger economy.

The general media has taken the workers' compensation institution to task for failing to live up to promises made over 100 years ago. In my opinion, this industry can not stand by the wayside and defend an indefensible position: that the safety net of work injury protection is not meeting its obligation.

What we need to do as an industry in support of the institution is to recognize these shortcomings, learn from them, and assist our lawmakers in making wise decisions to ensure that Tim, and others like him, get the support necessary to make them a sustainable position in the economy.

Here's the deal - every Tim that is off work needs to be replaced, and every Tim that doesn't have the financial wherewithal to meet needs after a work injury plays a part in economic stagnation.

Our mission through workers' compensation is to stabilize the economy, and get people contributing to it, not taking from it.

This report should stimulate us to come up with solutions to this vexing issue.

The report is free, but you must either logon with your WorkCompCentral account to download it or register a new account.
Posted by Unknown at 4:07 AM