"Will you decide to heal yourself and come back stronger? Or will you allow the injury to get the best of you? A great tool is to choose the best perspective and focus on what you want to happen," says Matt Belair, a sport psychologist in an interview in International Mountain Bike magazine. "I want to recover quickly and perform my best, I will continue to have total confidence in my abilities." 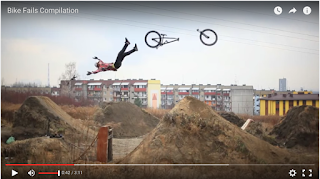 Athletes get hurt all the time. Particularly in the more "action" oriented sports more popular with the current generation, such as motocross, mountain bikes, parkour, etc.

Self belief is HUGE. The IMB article cited above is about accomplishing athletic feats at the very upper echelon of performance. There are lots of talented riders who are near equal in physical fitness and ability, for example, but only a very few have the mental horsepower to visualize and accomplish a world championship. or a double back flip with a twist over a 50 foot chasm...

That same mental horsepower is healing too.

This phenomenon works both ways - our brains can either learn to heal and overcome injury, or learn to be disabled.

Part of the external stimulus that affects neuroplastic response is system input - in our case how the laws, regulations and application of them to an injured worker's plight either stimulate, or depress, the healing forces.

It's sort of true that one can choose to be disabled, or not; but external stimulus plays a big part in that choice. And the starting point is the individual's own mental strength. If we are starting off with a person who's self picture is weak, then it is much more difficult to rewire his or her brain to overcome adversity than for someone who's mental picture of themselves is stronger to start with.

Founder of the all volunteer Work Injured Resources Connection (WIRC) in Adelaide, Australia, Rosemary McKenzie-Ferguson, sees the challenges on a daily basis. She deals with the people (not their cases) who are ejected from the workers' compensation system without the resources to find their new path in life.

She tells several stories in a recent publication of the Safety Institute of Australia about recovering injured workers, and she makes a very important distinction for those folks who are having a tough time finding normalcy in their lives: they need help understanding that they have an injury, and that they are not the injury.

This might be subtle, but it is an important distinction. One HAS an injury. When one BECOMES the injury, then they will not be able to overcome the injurious sequelae.

She writes about an injured factory worker who was earning $28,000 per annum and had to work endless hours of overtime to get up to $35,000 to support his family. His workplace injury meant he would never return to the factory floor.

WIRC first job was to get him to reimagine his life, reimagine his abilities, understand that HE was not the injury and that he had the power to change.

They got him started with a 12-week basic computer course and, according to Rosemary, "the last time I spoke with this injured worker he was based in Sydney, working between Sydney and New York, and earning many times the $28,000."

Another injured worker came to WIRC with industrial emphysema from working in the coal industry. The message he got from the system was “just go away” (that is the polite version). He lost his ability to believe in himself. According to Rosemary, this man is now a mentor for others entering the construction industry, using decades of hands-on workplace knowhow.

There is a big push in the workers' compensation industry to reinvent itself. After 100 years we have learned quite a bit about ourselves, our mission, and how we impact people and lives.

For instance, at third party administrator, Gallagher Bassett, claims adjusters are "resolution managers," a title that denotes the important role the claims person has in resolving the ultimate conflict - that of self-belief.

This is a great start. We are in the people business. People have worth and that worth begins with the self. We can provide medical care, and a few dollars to help pay the bills, but the ultimate success is when belief in the self is restored - then the pathways to one's return to health, return to society, return to work, are opened.

It's a whole new paradigm, I believe. It's not one that is going to be filled by special interest vendors, though certainly there will be many entrepreneurial efforts towards this paradigm.

It's an entire cultural shift. I can see it happening all around us. It's part of the reason why we started Comp Laude - to recognize those that have been successful in helping, and actually achieving, the best perspective for resolving the work injury.

Restoring the confidence in one's abilities - that's a tough job, and a real goal. From there comes all other success.

Some folks will never be able to reach that goal for one reason or another, be it childhood psychology, drugs, whatever.

But most people have that power.

And I think a revolution in claims resolution is slowly taking place in our industry as we recognize that it's not all about bill review, guidelines, indemnity limits or any of the other artificial system contrivances in place.

There's always a passel of bad news about work comp. But I also know that there's big pride in most of us for doing a job well in restoring an injured worker's self-belief.

"Focus on what you want to happen." We don't have to provide psychological services to every injured worker - just help them focus on recovering quickly, performing their best, and having confidence in their abilities. It won't work for everyone, but it will work for most.
Posted by Unknown at 4:32 AM