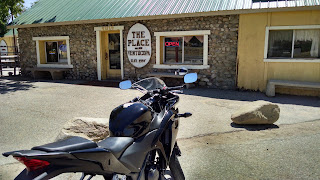 That's how far it is, point of origin my house, up Highway 33 through the Los Padres National Forest, into the Cuyama Valley, then to the coast and back home via the 101.

Except for the fast sweeping turns of Hwy 33, The Sewing Machine was not ideally suited for this mission, particularly since the ergonomics had been altered by me a few weeks ago. The majority of the ride was between 70 and 75 miles per hour, where TSM stoically spins the engine at 8,000 RPM without cough, hesitation or complaint. I was tucked in much of the time for aerodynamics to help that little engine, twisted up like a pretzel.

But it was a circuit I had been wanting to complete for some time, in part because I knew the scenery in the back country would be awesome, in part just because I wanted to experiment with the "sport touring" capabilities of TSM. I had time yesterday afternoon, so I suited up, gassed up, and headed for the hills.

The scenery didn't disappoint, and in fact I'd say for the most part was world class spectacular. A stop in Ventucopa and Los Olivos for hydration were small-town charming, and a stop in Santa Maria for fuel relieved the anxiety that started when the fuel gauge started blinking indicating reserve status.

Three counties in five hours. For some reason I thought it could be done in four.

The California workers' compensation insurance industry took a long trip with cost containment. It was something the carriers had been wanting to do for some time, and they embarked on that mission through legislative, regulatory and in-house routes.

Based on the latest report from the California Workers' Compensation Insurance Rating Bureau, the carriers now appear to be benefiting from their cost containment investments.

Though the gross spend on cost containment services has grown yet again, the rate of growth is abating, and the net pay to medical providers has been trimmed considerably.

But carriers paid $5.035 billion in medical benefits last year compared to $5.221 billion in 2013, a drop of 3.6%, which compares favorably to general health which saw medical costs increase 2.4%.

In the mid-1990s, total medical costs (both medical-only and indemnity claims) were in the $2.5 billion neighborhood (after deflating from about $3 billion).

Back then, if there was "cost containment" it wasn't separately stated as an allocated expense - that expense was lumped into the overall medical expense category. It wasn't until 2011 that the WCIRB started breaking cost containment out as a separate line item.

Based on the consumer price index inflation rate, that $2.5 billion in 1995 medical expenditure would be $3.9 billion in 2015 dollars.

Since cost containment is less than half-billion dollars per year, then at least compared to general inflation, the mission hasn't succeeded: $5.2 billion minus $3.9 billion equals $1.3 billion, minus the half billion in services, means a net increase over inflation adjusted dollars of $800 million.

I don't know when cost containment became so prevalent in work comp. WCIRB's chart shows in 2007 the industry spent $245 million but in the next year that figure grew by $100 million. Now it's $471 million.

I'm having a hard time justifying the expense of cost containment services based on that simple analysis. Would it be worse without those services? I don't know, because we can't rewrite history, but based on past activity it certainly doesn't seem so.

What's worse is that these programs benefit the carriers nicely now, but I don't see those savings being passed along to the policy consuming employers. Not only have premiums continued to escalate, but delays, avoidance and denial inherent in cost containment "services" seems to interfere with good claims management: claims stay open longer, much longer, now than in the past and the indirect costs of greater disability frequency and severity come back to haunt the policyholder as well as the injured worker.

It's been an interesting trip these cost containment years. It started out with some compelling winding road as the industry found its way up the mountain, but down in the valley of reality the road straightened out, the hum of 8,000 rpm travelled relentlessly to the bars, numbing our hands and making our knees ache.

If I'd kept TSM's ergonomics stock, the trip wouldn't have been so fatiguing. I would have still had to put up with a singing engine most of the trip, but at least I would have been sitting more upright.

True, I saw some spectacular scenery in a lightly traveled part of California that is essentially in my back yard ... but I wouldn't do it again, not on TSM.

I have to wonder the same about cost containment - what really is the net effect, and should we continue traveling that road?
Posted by Unknown at 4:31 AM

Email ThisBlogThis!Share to TwitterShare to FacebookShare to Pinterest
Labels: fee schedule, IMR, UR