Flying home from business in Nashville yesterday, an article in American Way magazine caught my eye - the Special Olympics World Games is coming to Los Angeles at the end of this month.

A big poster in the terminal at LAX advertised the Special Olympics.

And a graphic on the side of a parking service van highlighted the coming games.

It was everywhere around me, speaking to me. 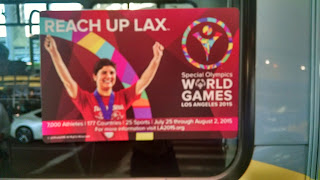 The Special Olympics is open to adults with intellectual disability. Defined by the American Association of Intellectual and Development Disabilities, a person will have an IQ of under 70 to 75, will have significant limitations in two or more adaptive areas and a manifestation of the condition before age 18.

There will be 6,500 athletes representing 160 countries participating.

The quotes published in the magazine article from some of the people involved in the games reminded me, of course, of workers' compensation and the people that are the subjects of the system (injured workers) and the volunteers (us people that make a living trying to administer benefits).

"At best, these are individuals who are invisible to most of the world, despite there being approximately 6.5 million people with intellectual disabilities in the US today and nearly 200 million in the world," Janet Froetscher, CEO of Special Olympics says. "At worst, they're seen as completely worthless."

I'd say the population of injured workers in the US today is about the same size - I don't know about international numbers, but 200 million doesn't seem far off either.

Think about that though - in the U.S. we have a mature, relatively, robust workers' compensation program. Sure each state is different and sure benefits aren't uniform. Many times there are issues in the delivery of benefits, but at least in the U.S. there ARE benefits.

I always seem to go back to the Bangladesh garment factory fire in 2012, where 112 people were killed and thousands injured, some severely.

Sure, officials arrested and ostensibly prosecuted factory owners and culpable employees for that tragedy, but that does nothing for the victims, who don't have any safety net of any kind.


There are more than 4 million garment industry workers in Bangladesh, each of them lacking workers' compensation protection.

And there were stories of factory workers, after having lost loved ones and limbs, going back to work to put food on the table for the family.

"Our athletes, you just can't tell them what they can't do," is what Janet Froetscher, CEO of Special Olympics says in the article. "They're all about what they can do."

A component that is missing from our workers' compensation psyche - ability.

I don't know how to fix that. I'm not sure it's even a problem. It is what the system is based on and what we work with. But the contrast in philosophy can be striking, and it goes to the root of the perception of being injured at work.

Timothy Shriver, Chairman and son of Eunice Kennedy Shriver (sister of JFK), says, "What special Olympics does is enable individuals to reclaim the dignity and common humanity that's been robbed from them, sometimes from birth, by life, circumstances and other human beings."

You don't need to scour the Internet much to find tales of workers, some former athletes now wilting in wheel chairs, some with brain injury sequelae unnoticeable until mental engagement is attempted, neglected by a system that was supposed to protect them from medical maltreatment or nonplused intervention by third parties.

The vast majority of the people that work in this industry "volunteered" for the job - in all my years in workers' compensation I have yet to meet someone that said that they had planned a career in the industry. All of us seemed to have "volunteered" to do a job in work comp, and have never left.

"Special Olympics has 1.3 million volunteers, including 360,000 volunteer coaches," Hannah Teterboro, Olympic snow boarder, says in the article. "And I think most of them would agree: It's actually the athletes doing the real teaching here."

That's something that we don't do well in workers' compensation - listening to the injured workers and learning from them. We're all experts in our own little niches. We have Medical Bill Review specialists. We have Utilization Review people. There are medical professionals, claims professionals, legal professionals ... Few of us actually learn from the injured worker or engage in what celebrity trial lawyer Gerry Spence teaches at his trial lawyers college: experiential lawyering (substitute claims handling, medical service, or any other title to "lawyering").

"We have a story that we want told," says Froetscher at the end of the article. "These athletes have stories that everyone should hear. Stories of authentic human courage, real human transformation, real human beauty, deep human goodness, and I think these are things the world could really use right now, don't you?"

I do. I hope you'll join me and a few hundred other folks in workers' compensation to recognize that we can, and do, good work for people on December 5 in Burbank, CA. Be a part of the solution and nominate the people that do good. Participate in the celebration and recognize those that make the system function. Learn how we can do better.

We have a story to tell that I think everyone should hear.
Posted by Unknown at 4:34 AM