If I Had a Hammer 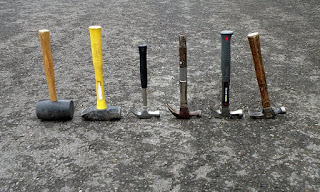 The line where the work place begins and a worker's personal life ends has always been a source of contention in workers' compensation cases.

In Iowa, a Court of Appeals ruled last September that a worker couldn't get an award of benefits for her alleged injuries from a fall after she bumped into her brother in a hallway at work. The court found that Valerie Dillavou's brother Greg Knopf had intentionally shoved her, which brought the incident outside of the comp arena because the spat had nothing to do with their jobs.

A New York appellate court ruled last July that a retail worker who became the target of a murder-for-hire plot and an internal investigation by his employer based on his alleged affair with a colleague was entitled to an award of benefits for the resulting psychological distress that prevented him from continuing to work.

Last May Florida 1st District Court of Appeal overturned the denial of death benefits to the surviving family of a grocery store worker who was run over by the jealous boyfriend of one of his coworkers as he was gathering shopping carts in the store parking lot, finding there was a risk of being hit by a car in a parking lot existed regardless of who was operating the vehicle.

In August 2012 an Illinois Appellate Court ruled that a murdered restaurant worker's death arose out of his employment since all the evidence indicated that Edan Maya's motive for killing him was a disagreement they had earlier in the day about who should have the top fry cook position at Frankie's Beef/Pasta and Catering.

Yesterday the Nebraska Court of Appeals ruled that a sugar factory employee was not entitled to workers' compensation benefits for his injuries from an assault by a colleague armed with a brass hammer.

The court said it was plausible that Bates would have never met McDaniel, learned of his criminal history, or had the opportunity for the assault if they hadn't both worked for the Western Sugar Cooperative. Nonetheless, the court concluded that Bates' motive for the attack was wholly disconnected from Western Sugar’s business and therefore McDaniel's injuries were not compensable.

In a commentary to the WorkCompCentral report on the McDaniel case, claimants' attorney Todd D. Bennett of Rehm, Bennett & Moore, had an interesting observation demonstrating just how fact specific these kind of cases can be.

He said if it were his case to try, he would look into whether the hammer Bates used in the assault was a required tool for his job, and "that would be the angle" for saying there was a work-connection.

The case was Phillip McDaniel v. Western Sugar Cooperative and The Phoenix Insurance Company, No. A-14-793. The case apparently will be appealed.
Posted by Unknown at 3:52 AM