It was one of those rough, emotional visits with Mom yesterday.

She and Dad were married 70 years ago on June 30. I didn't think she would remember. I didn't know if she would even care. It would be interesting to see her reaction though.

Mom wasn't walking yesterday. She was sitting on the chair portion of her walker. She looked and acted slow. At 91, every day is a challenge, but this seemed to me more of a challenge than lately. 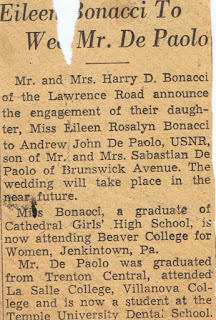 Robert was at another table with his wife, Virginia. Robert is a British author. Virginia has Alzheimer's. When I met them 16 months ago Virginia had notable memory impairment, but she could walk, and I could talk with her.

Robert sees her every day and pays incredible attention to her. Recently Virginia has been receiving hospice care and much of the time recently I had not seen her because she was in her room. Yesterday she fidgeted in her wheelchair, nearly emaciated, unable to control her movements. Robert attended to her with his cheerful attitude as best he could.

I don't know how he does it.

Bruno is from Austria originally, though he and his wife Yvette, a French native, had been living in the Escondido area for the past 25 years. Bruno moved Yvette into Mom's facility about a year ago because, at age 81, he could no longer provide her with the care an Alzheimer's sufferer needs.

Bruno was crying. Yvette would not wake up yesterday. She hasn't eaten anything in several days.

She had a haircut recently and her grooming was neat. She wasn't connecting though. She hasn't said my name in a very, very long time.

I showed her the engagement announcement and she stared at it intently. I'm sure she read every single word several times over, trying to make sense of it. She concentrated hard, her brow squeezed tight with effort. Occasionally a smile would emote. Mostly, though, she looked confused.

"Mom, can you imagine that it was 70 years ago today that you married Dad and started a family?"

We moved on to another topic of conversation as the opening course, a carrot and raisin salad, was served. I showed her pictures of my recent trip to Italy, again, and she smiled pleasantly.

I don't think she remembers Dad anymore. I don't think she understands she was married. She held my hand. Her's were cold and mine felt good against her arthritis. She looked into my eyes and smiled - a warm smile of trust.

I do think she feels I will be there for her. Because it's true.

California's recent copy service regulations and fee schedule should have leveled the playing field, should have evoked more trust between payers and vendors.

But it seems that is not the case.

Copy service vendors believe that payers are going to exploit loopholes created by the new regulations to deny paying for legitimate services.

Claims payers have commented that copy service companies can't be trusted to not abuse the new system and to seek payment for services never provided.

Both are saying that more lawyers are going to be necessary...

All this time, these many years of living together under the roof of the same system, and still no trust.

What's sad about the entire situation is that no one, not the copy services, not the claims payers, not the government, says anything about the injured worker or the employer.

It's a system that feeds upon itself, and that will be the destruction of it.

While we're seeing blank stares from the people and companies that are to be providing the services and goods to make this system work properly, nourishment is ignored, relationships are forgotten, atrophy sets in.

Bruno, Robert, and others will try to keep their spirits up, hanging on to memories of 70 years ago.

Eventually, everything passes.
Posted by Unknown at 4:23 AM