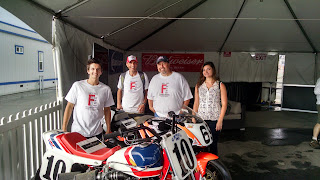 I had t-shirts printed up for my race entourage because I thought it would be fun, and the F is about 5 inches high, in red, so we could find each other in a crowd,

There's not a whole lot better than going to the motorcycles races. This time it's the FIM ENI World Superbike Championships USA round at Laguna Seca in Monterey, CA.

I think, to me, this is the ultimate celebration of freedom: fast, loud, risky, color, excitement, food, drink, thrills. I'm like the proverbial child in a candy shop when I'm at the races. My friends crack up when they see me ebullient about the races. My wife just thinks I'm nuts...

I get just as excited when I see injured workers not only recovering from the disaster that interferes with their lives, but going above and beyond to do things that they would never have imagined they could accomplish.

I've written about Dwight Johnson before - he's the double amputee (two separate industrial accidents) who overcame years of pain, doubt, depression to start his own artisan shoe company, Soule Innovations. Dwight will be speaking about his experience at the California Coalition on Workers' Compensation conference at the Disney Grand California Hotel on Wednesday. If you are at that event you don't want to miss his speech.

Across the other side of the globe, in the lower hemisphere, injured workers face the same kind of challenges as they do here in the United States. It seems that there are universal themes in work comp, regardless of the nation, the state, the design of the system. I guess there are just inherent elements that can't be engineered out.

One person, again someone that I've written about before, is Rosemary McKenzie-Ferguson founder of a non-profit charitable organization dedicated to restoring confidence to those who have gone through the work comp system. She was an injured worker too, and found that the most debilitating part of workers' compensation is the emasculation of people's egos.

Somehow, through unbelievable challenges, she has not only been able to provide some sustenance and love to needy injured workers in her neighborhood, but has found a was to repatriate these folks back into the working world.

Her latest project entails getting injured workers to donate their services to provide Bags of Love to others. Here's her latest account:


It has taken a lot longer than any of us at the Centre would have liked- however after many tears and a lot of frustration and loads of laughter and an rather risqué fashion parade the Bags of Love Op Shop will open on the 31st July 2015 .

It is yet another first in the wonderful world of workers compensation as the Bags of Love Op Shop is run completely by injured workers for the benefit of injured workers as each of them rebuild their lives in ways that has never been seen or done before.

We know that in the greater scheme of things the opening of an OP Shop won’t be a measurable shift in workers compensation, but in the injured worker community it is a massive positive step forward- each one of the injured workers who have been working towards this project has been “rejected” by the very system that is meant to have been in place, one of them has 6 hours medical capacity a week, one of them the system has abandoned.

All of them are so dedicated to the task of growing past the systems “judgement” of them as “not worth the effort”.

As each of you knows the Centre receives no funding, over many years and multiple attempts to have various ministers recognise the Centre, we had two choices- close the doors and admit that the system had beaten us. Or find a way to fund the Centre past my own income.

The A Team took it upon themselves to build the Op Shop, they gathered the infrastructure required, they collected the donated goods and clothing, they found a way to achieve.

All I did was give them the time and the space and the support that they needed to fly.
As I said there won’t be any ribbons cut or speeches made, there will be tears of relief at the end of the first day.
And in the true tradition of that horrid advert –But wait there is more… in the coming months more is planned to expand the Op Shop for now I can’t say what that is….

There are many participants in an injured workers' recovery, not the least of whom is the worker's self. Rosemary is showing the world that all is not lost, that there is still utility and hope in life, just as Dwight Johnson has done.

To me, this is as exciting as the races, just as thrilling, if not more so.

The back of our t-shirts exclaim, "Stay the F out of my way..." Indeed, people like Rosemary and Dwight and many more injured workers are saying the same thing - get out of their way;  they're going to the races!