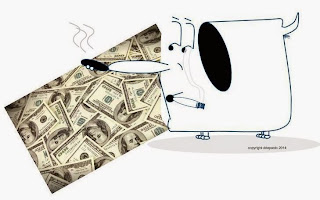 Every business or organization that spends money (that would be all of them) must do the same thing.

Sort the expense line items in descending order. Attack the biggest one first. Once it has been "worked to completion" (can't do any more to improve that one), move on to the next.

That works out to 0.021% - that is two/one-hundredths of one percent of all premium (note, this is NOT just workers' compensation premium).

I'm not sure that's a very good track record to be boasting about, particularly when you see the size of the fraud that gets reported.

No doubt, everyone has to pick their battles. Is employer fraud, provider fraud, employee fraud, or (yes, it happens) carrier fraud the worst problem facing the work comp system?

It seems in terms of overall public impact, the fraud problem is, in descending order, the first three.

But, carrier fraud, which I'll lump brokers and agents (procurement fraud) into, may be bigger in terms of gross dollars. In insurance terms, frequency is less, but severity is greater, than the other types of fraud, and certainly not just in California.

In 2012, $16 million in restitution and jail time was ordered for operatives of a Nebraska insurance agency found to be bilking the system.

And of course there's the Antonucci/Park Avenue fraud involving hundreds of millions down the pipe.

It goes all the way to the top of the big guys - GenRe copped to sham reinsurance deals with AIG inflating loss reserves by $500 million so AIG wouldn't have to pay premium taxes.

Compare those to an indictment that was unsealed this week, exposing the arrest and allegations against physicians, chiropractors and their operatives for illegal kickbacks in the California work comp system amounting to about $25 million. That indictment was the product of years of investigation at considerable cost.

While the return on investment in terms of pure dollars spent and recouped in fraud investigation and prosecution doesn't seem to pan out, public perception and communication of the message that fraud is wrong is an important element to the ROI equation - most people are honest, and will stay honest if they know someone is watching...

I have mixed emotions about reducing the cost of work comp. That is an employer problem that gets passed on to the consuming public.

In my opinion, our industry's insane focus on cost containment would better be directed towards benefits for injured workers. We have to fight fraud, no question about that. It seems to me, though, that fraud, and other costs, are a distraction.

Think about it – Medicare claims 3% in administrative costs. Their worst critics claim 8%. Right now, the California carriers are spending over 40% in loss adjustment and administrative expenses.

Remember - the workers' compensation system is intended to be a benefit for employers and their workers - not all of the vendors that ride on the system's coattails (and that includes district attorneys)...

And another thing - brokers and agents. The vast majority of employers are small businesses. They simply don't need sophisticated services that brokers offer. Increasingly, in fact, there is a trend of insurance direct services through the Web.

Why would we pay brokers 6.7% to procure government mandated coverage? Good Lord! In less than three years we set up "Insurance Exchanges" for individuals to handle the Affordable Care Act's mandate. States can elect to create their own or let their citizens use the Federal site.

Yes, the sites are complicated and the decisions are too. But it can be done in about half an hour. The point is that the "small market" is just as adequately serviced without an intermediary placing the insurance and adding nearly 7% to the cost as it is with that intermediary - the value added for the small market isn't there, and takes money away from the benefits bag.

All I'm saying is that we need to step back and breath. Don't get your undies in a bunch about "costs." Costs in the system drive more costs, and sometimes I think we have lost sight of the big picture.