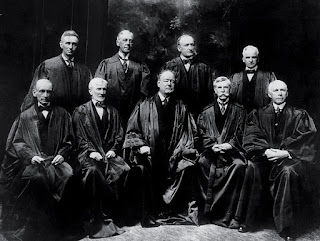 Jacob White was a night watchman for the New York Central & Hudson River Railroad Company. White's job was to guard the tools and materials intended to be used in the construction of a new station and new tracks upon a line of interstate railroad.

He died on the job. The courts found that his job did not involve interstate commerce and thus his death was covered by New York's workers' compensation system (as opposed to the Federal Employers' Liability Act) and awarded benefits to his widow accordingly.

A constitutional challenge to New York's workers' compensation law was raised by both the railroad and the widow:

(a) that the employer's property is taken without due process of law, because he is subjected to a liability for compensation without regard to any neglect or default on his part or on the part of any other person for whom he is responsible, and in spite of the fact that the injury may be solely attributable to the fault of the employee;

(b) that the employee's rights are interfered with in that he is prevented from having compensation for injuries arising from the employer's fault commensurate with the damages actually sustained, and is limited to the measure of compensation prescribed by the act, and;

(c) that both employer and employee are deprived of their liberty to acquire property by being prevented from making such agreement as they choose respecting the terms of the employment.

The Court's dialogue is eerily prescient of today's environment:

"In support of the legislation, it is said that the whole common law doctrine of employer's liability for negligence, with its defenses of contributory negligence, fellow servant's negligence, and assumption of risk, is based upon fictions, and is inapplicable to modern conditions of employment; that, in the highly organized and hazardous industries of the present day, the causes of accident are often so obscure and complex that in a material proportion of cases it is impossible by any method correctly to ascertain the facts necessary to form an accurate judgment, and in a still larger proportion, the expense and delay required for such ascertainment amount in effect to a defeat of justice; that, under the present system, the injured workman is left to bear the greater part of industrial accident loss, which, because of his limited income, he is unable to sustain, so that he and those dependent upon him are overcome by poverty and frequently become a burden upon public or private charity, and that litigation is unduly costly and tedious, encouraging corrupt practices and arousing antagonisms between employers and employees." [emphasis added.]

A standard was espoused by the court - a compulsory workers' compensation system must be a "reasonably just substitute" for common law tort rights:

"The statute under consideration sets aside one body of rules only to establish another system in its place. If the employee is no longer able to recover as much as before in case of being injured through the employer's negligence, he is entitled to moderate compensation in all cases of injury, and has a certain and speedy remedy without the difficulty and expense of establishing negligence or proving the amount of the damages. Instead of assuming the entire consequences of all ordinary risks of the occupation, he assumes the consequences, in excess of the scheduled compensation, of risks ordinary and extraordinary. On the other hand, if the employer is left without defense respecting the question of fault, he at the same time is assured that the recovery is limited, and that it goes directly to the relief of the designated beneficiary. And just as the employee's assumption of ordinary risks at common law presumably was taken into account in fixing the rate of wages, so the fixed responsibility of the employer, and the modified assumption of risk by the employee under the new system, presumably will be reflected in the wage scale. The act evidently is intended as a just settlement of a difficult problem, affecting one of the most important of social relations, and it is to be judged in its entirety." [emphasis added.]

But the Court warns:

"This, of course, is not to say that any scale of compensation, however insignificant, on the one hand, or onerous, on the other, would be supportable. In this case, no criticism is made on the ground that the compensation prescribed by the statute in question is unreasonable in amount, either in general or in the particular case. Any question of that kind may be met when it arises."

One hundred years ago, and the intellect, and great wisdom of justices White, Van Devanter, Holmes, McReynolds, Brandeis, Day, Clark, Pitney and McKenna saw that there had to be a balance, that in order for both the employer and the employee to be forced into a structured program for work injuries that each had to give up rights in order to achieve fairness.

I had opined in the past that workers' compensation has nothing to do with fairness or justice, and that such determinations are in the hands of the legislatures that pass the laws creating and maintaining work comp.

I still maintain that position, so long as the system created or maintained meets the standards espoused in 1917:

1) There must be certainty;
2) It must be speedy;
3) There must not be any protracted disputes about fault or damages;
4) The employer's obligation must be limited and fixed;
5) The entire program must be viewed as a whole; i.e. no one facet takes precedence over any other.

There are constitutional challenges going on in state courts around the nation. Florida, Oklahoma, California ... each of the challenges to the state programs focus on singular, specific areas of workers' compensation law.

-"the expense and delay required for such ascertainment [of AOE/COE or disability] amount in effect to a defeat of justice"-
-"the injured workman is left to bear the greater part of industrial accident loss, which, because of his limited income, he is unable to sustain"-
-"frequently become a burden upon public or private charity"-
-"and that litigation is unduly costly and tedious, encouraging corrupt practices and arousing antagonisms between employers and employees"-

I don't think so. There is neither the political will, interest or fortitude for Congress to do so.

But the right case to the US Supreme Court, asking it to revisit the standards espoused 100 years ago could change everything.

Are modern workers' compensation systems (or an employer's opt out program) a "reasonably just substitute"? [Page 243 U. S. 201] There's good argument that we have strayed from that standard, and it will be both an employer and it's injured worker who will make that challenge together when the employer feels it is paying too much for too little, and the employee feels he is getting too little after suffering too much.
Posted by Unknown at 4:11 AM