I like that phrase because it makes people smile.

I got hooked on "super-d-duper" watching Sponge Bob Square Pants when my children were little. That cartoon program was revolutionary in the sense that Bugs Bunny was when I was growing up. The slap stick is decidedly childish, but adult humor is subtly interwoven. Pay attention and you'll find political satire, contemporary comedy, and just downright funny adult stuff.

Sponge Bob Square Pants did an episode about workers' compensation entitled The Splinter, and the only reason, I'm convinced, that it did not draw the ire of the industry like the article series by ProPublica, or Texas Tribune, or OSHA's report is because there is no humor in those reports - they are stark vignettes that hit nerves sharply in those professionals who really do care and who really are trying to make a positive difference in people's lives.

But Sponge Bob's "The Splinter" was just as critical, if nor more bitingly, than these more recent publication. Because the criticism is hidden in satire, though, most wouldn't see the critique.

I'm not sure Sponge Bob, or any other character in the series, ever really says "super-d-duper" but it seems like a phrase that he would utter with his characteristically goofy laugh. 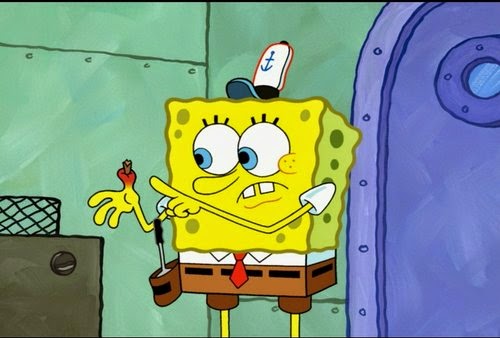 Super-d-duper is an unwitting powerful phrase that uncovers the happiness that all of us want to feel.

At Mom's memory care facility I see how Alzheimer's destroys a person's sense of humor and life. The long, drawn out faces of despair reflect acknowledgment and frustration that the mind no longer works the way it used to.

There's something about Alzheimer's that inhibits those mental capacities.

For instance, Juanita is a resident at Mom's memory care facility. She has the distinction of being a prolific world traveler, and she has a twin sister in her home town of Minneapolis. But she is alone most days in the dining room. Mom doesn't dislike her, but doesn't like to be around her either. Most people I talk to at the facility don't like her. Juanita is negative most of the time, and at times can be downright nasty - that's part of the Alzheimer's legacy.

But Juanita does have emotions and does want to feel happy; her disease gets in the way.

Except when I ask how she's doing. She'll reply curtly, "fine" and I'll tell her, in a sort of Sponge Bob sort of voice, "Well Juanita, you're looking super-d-duper to me today!"

Her smile upon hearing that is as sincere and happy as if there were no brain impairing disease.

Jim was a Navy Seal Commander, and led a very successful business executive life after retiring from the Navy. His face is mostly blank. I can't imagine the torture that must go on from time to time as he tries to communicate, or remember, or do any of the most natural mental tasks we all take for granted.

But he lights up when he's told he's looking super-d-duper.

The phrase works wonders in nearly every setting.

Yesterday I was traveling to Gulfport, MS for the Mississippi Workers' Compensation Educational Conference. Flying out of LAX, I give myself 3 hours to commute from my house to departure time. It's only 60 miles.

For whatever reason, all southbound arteries to LAX were jammed. Even the parking garage I use was so packed with vehicles that I ended up leaving my truck literally in the middle of the parking entrance with the gate up.

Consequently I missed my flight to Houston, which is a prerequisite to getting to Gulfport. There was another flight but I would miss my connection, and there were no later connections into Gulfport. Frustrated and exhausted I opted to stay in Houston and catch the first flight into Gulfport the next morning.

At the Houston Airport Marriott restaurant that evening, still frustrated, and hungry, the nice waitress greeted me with the inevitable, "how are you today?" Nearly out of habit I replied, "super-d-duper!"

She laughed. I felt better.

Workers' compensation is serious business. We're in an industry that is tasked with taking care of people that are down on their luck through no fault of their own (perhaps sometimes a little bit of stupidity, but when does that get in the way of humanitarianism?). There are issues of medical care, drug monitoring, changes to legal standards for compensation, reimbursement schedules, and of course exclusive remedy.

When things work well, the splinter gets removed, Sponge Bob returns to flipping burgers and Mr. Crabs is a happy employer.

So, when you talk to an injured worker and they're sounding down, tell them that you hope they have a "super-d-duper day." When dealing with your client and they ask how you are doing, exclaim "super-d-duper!" When a colleague tells you that they aren't feeling so happy, tell them, "well you're looking super-d-duper to me!"

It's ridiculously simplistic and of course isn't applicable all of the time. But often enough all that stands in the way of a normal day in our world and a really good day, whether its dealing with workers' compensation, traffic, travel rearrangements, or any other little frustration in life, is a simple "super-d-duper."
Posted by Unknown at 3:32 AM