A recent California Workers' Compensation Appeals Board panel decision may cause a bit of tumult in the already contentious forum of Independent Medical Review.

In an order granting reconsideration by applicant Diane Garibay-Jimenez, Commissioners Rick Dietrich, Deidra Lowe and Cristine Gondak found that not only is it the employer/administrator's sole responsibility to make sure that IMR is provided with all relevant medical records (in a timely fashion) but that failure to do so means that an IMR reviewer, and thus the Administrative Director under Labor Code section 4610.6, acts without or in excess its powers.

Garibay-Jimenez had an admitted injury to her cervical spine and elbows. The treating doctor sought authorization for surgery: left ulnar nerve decompression.

Utilization review denied the request and that denial was upheld by IMR.

IMR did not get a copy of reports issued by the Agreed Medical Examiner that allegedly support the treatment recommendation. 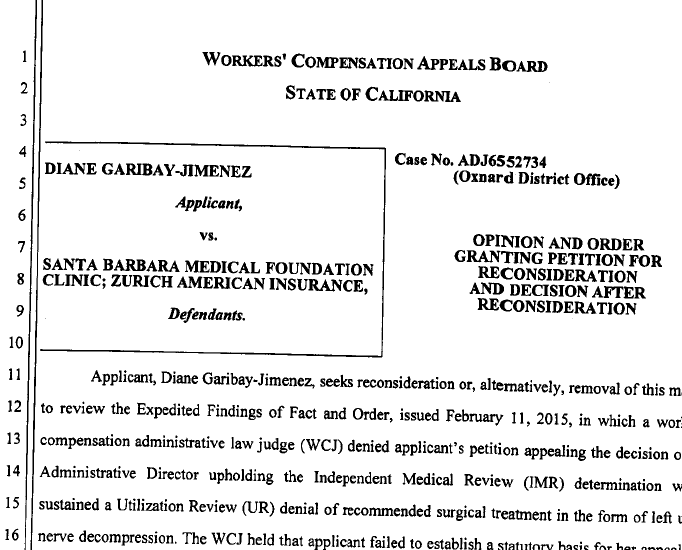 The applicant filed an appeal of the decision of the Administrative Director (IMR decisions get formally adopted by the AD as, essentially, an "order") which the Workers' Compensation Judge denied.

The WCJ held that applicant failed to establish a statutory basis for the appeal because she did not provide the Agreed Medical Examiner reports to IMR, and that it would be unreasonable to make the defendant pay for another IMR. Specifically the WCJ noted that the applicant "provided various medical records" but "inadvertently left out submitting the AME reports, notwithstanding they were in their possession at the time the other records were forwarded to IMR."

By the time applicant noted the omission and mailed the AME reports to Maximus an IMR denial had already issued.

The WCAB panel reversed noting that it is the employer's statutory, mandatory obligation to provide all relevant records under Labor Code section 4610.5(1). This is supported by Administrative Director's Rule 9792.10.5, again using the word "shall" relative to supplying records.

Consequently the WCAB said there were grounds for the appeal:

The WCAB also chastised the WCJ for failing to formalize the record on review:

The case goes back to IMR now for another bite at the apple, so to speak.

While a panel decision is not citable as binding precedence, it is demonstrative of the WCAB's current thinking on immediate issues. Certainly the WCAB has had issues with IMR in the past...

The latest issue with IMR involved the Maximus spreadsheet reflecting a lot of missing medical records. Some blame Maximus, some blame counsel, some say it's not a problem.

And the Division of Workers' Compensation is mulling electronic records submissions.

I've railed against the heavy procedural burden that has overtaken California workers' compensation in the past, but if we're going to have procedures, then they have to be followed as written, particularly when procedure is mandatory (as in "shall").
Posted by Unknown at 3:54 AM