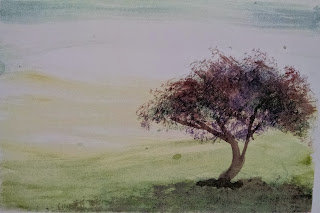 This is what workers' compensation has been referred to for the over 100 years it has been in existence.

Both compromised. Both made assumptions about the scope and extent of their bargains based on what they knew at the time.

What they knew at the time was broken bones, amputations, death and dismemberment.

Neither could forecast, nor had any appreciation for, industrial disease, asbestosis, cumulative trauma, psychiatric injury, opioids, or co-morbidity.

Guidelines, bill review, utilization schedules, medical networks, and other "tools" were not contemplated either.

Back then, professional athletes weren't "employees." There was no such thing as "health insurance." The Social Security system wasn't invented yet. Mechanization was just starting. Horses had yet to be supplanted by automobiles. The Wright Brothers were just discovering controlled, powered flight. We had yet to experience a couple of world wars, let alone terrorism. There weren't computers, and in fact there was barely electricity and plumbing.

The question Mark Walls recently posed to a panel comprised of myself, Bob Wilson of Workerscompensation.com, Mike Gavin of Prium, and Tom Robinson of LexisNexis was, is the "Grand Bargain" still "alive"?

In other words, Walls provoked, has the evolution of workers' compensation deteriorated what both Labor and Business had bargained for in the first place?

The arguments are strong that, yes, the "Grand Bargain" isn't what it was.

Business now argues that work comp costs too much for what it does.

Or does it? What is different now about workers' compensation than in 1911?

Why do we lust after the "good old days"?

Let's look at the "good old days" - the following charts are from the latest State of the State report from the Workers' Compensation Insurance Rating Bureau, and from NCCI's 2015 State of the Line report.

First off, claim frequency is way down compared to the base index year of 1962 (WCIRB):

Secondly, insurance rates per $100 of payroll aren't that much different than they were in 1978 (WCIRB):

Third, while indemnity nationally has not kept pace with wage inflation, there was a period of time where indemnity was grossly disproportionate to wages (NCCI): 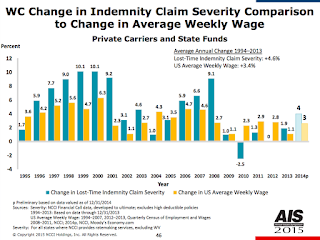 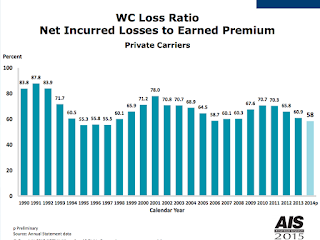 Take a step back and look at the big picture. Sure there are, as psychologists like to call it, adjustment disorders. But as the Diagnostic and Statistical Manual of Mental Disorders notes, adjustment disorders are temporary, and it is expected that the disorder will abate once a new level of adaptation has been attained.

And this is what happens in workers' compensation. Adjustment occurs, disorder happens, and adaptation follows.

Sometimes there are big changes to the bargain. We call this "reform" (or if you're on the other side of the equation, "deform"), and a big block of law is altered.

Sometimes the changes to the bargain are subtle, such as the imposition of a fee schedule on California copy services.

And there are always people that will take advantage of the deal in any manner they can - because at the end of the day everyone, and I mean everyone, looks out first for their own self interests.

The most valuable lesson I learned in law school was that a good settlement is evidenced by the fact that no one is happy. If someone is happy, then that means they got more than they expected, which is more than they should get. If both sides are unhappy with a settlement - that's the sweet spot - because both sides had to give up something in order to reach the compromise.

I have no doubt that without workers' compensation the work place would be a whole lot more hazardous. Sure there are governmental entities that regulate, inspect and punish poor work place safety practices, but nothing speaks to business better than money, and the fact is the safer the workplace, the less expensive it is to insure that workplace.

And I have no doubt that without workers' compensation, or some other form of work injury protection in place, there would be a lot more losers than there are winners. Business would lose. Labor would lose. Government would lose.

We can argue about the details, about the haves and have-nots.

So, is the "Grand Bargain" still alive? Is workers' compensation still relevant?

But it isn't going away because it is too important to the Social Good.

The "Grand Bargain" is still alive and well. The details may have changed, and who wins and loses might change; and they'll change again...
Posted by Unknown at 3:49 AM