Leading At The Top 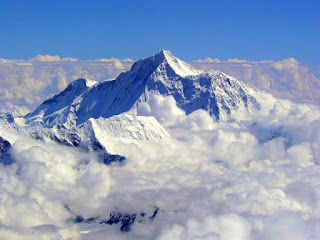 Holy moly was it warm this weekend in Southern California.

We don't have air conditioning at the beach because it would be useful, maybe, a dozen days a year.

So, like most reasonable people, Anne and I used someone else's air conditioning by going to the movies. Everest was the choice: cool (cold) climate, breathtaking scenery, tragic drama...

I'd read about the 1996 expedition tragedy in Ed Viesturs' book, "No Shortcuts to the Top: Climbing the World's 14 Highest Mountains" (2006). The movie, Everest, was taken from Outside Magazine's Jon Krakauer's recount in the book, "Into Thin Air" (1998). Krakauer was on the fateful expedition, and had been embedded to recount an Everest summit attempt, though not a tragedy. Viestur was a consultant to the film, and is a small role too.

The protagonist in Everest is Rob Hall, a New Zealand mountaineer who, like Viesturs, had climbed many of the world's 8,000 meter peaks. He started a company to take adventurers to the summit of Everest, and this is the origin of the story.

Mountaineers have their own community. There just aren't that many people that scale 8,000 meter peaks, and those that do have a special bond because they have similar backgrounds experiencing the risks, the hardships, and survival at jet liner cruise altitudes.

1996 was a popular Everest year and too many people that didn't belong on that mountain, with some 20 teams crowding base camp all at once, attempting to hit a narrow window of opportunity between weather systems.

There were too many on the mountain crowding the pathway to the top. Though Hall tried to get all of the teams to work together, a contingency wanted no part of the community. And even though two teams did end up cooperating, their fate was determined by the more selfish climbers, who, it has to be assumed, had some part in removing key ropes to the top and using stored oxygen bottles, which meant the other teams had to spend valuable time, energy and resources reconstructing the path, and obtaining more oxygen.

And a big mistake was made on the mountain by Hall. Viesturs laments this in his book - ignoring the hard time limit of summiting Everest: if not on top by 2 p.m. then there is no summit. Viesturs' working motto, “Reaching the summit is optional. Getting down is mandatory,” was fatefully ignored by Hall to get a climber, Doug Hansen, for whom this would be his third and final attempt summiting Everest, to the top, exposing the team to one of the worst storms in Nepal history.

People died. Others terribly injured; Because team cooperation was disdained, and rules not followed.

The examples set by most of the expedition leaders led to chaos and tragedy. The mountain climbers, though perhaps experienced and skilled in mountaineering, still require strong leadership, particularly in the extreme climate of 8,000 meter peaks, and team member cooperation is vital.

Even Rob Hall failed in leadership, succumbing to Doug Hansen's pleas to summit despite the late hour, Hansen's failing health, and the "hard" time of 2 p.m.

The leadership failure is not unlike the workers' compensation industry.

An industry friend asked me, "Where are the company execs at these big work comp conferences? I see Dave North (CEO, Sedgwick) at the big ones. He even attends sessions. I never see other execs from big carriers, TPAs or service providers at these unless they are speaking. Then they show up for their session and leave.

"What message does it send to the industry when our industry leaders are invisible and always behind the scenes? How do these people stay connected to an industry when they never get out and mingle with the masses. Playing golf and meeting with other execs is not enough...."

My friend has a point.

An executive's primary job is to lead. Leadership happens best by example, and sometimes against personal desires or wishes.

But if the leaders of this industry aren't out there leading, then how can we expect the troops to follow the same old worn and trite communications?

Mr. North attended the Blogger's Panel session in Dana Point a couple of weeks ago, and specifically took me to task about my posts on internal industry fraud.

As he should. He defended the industry against the accusations that I communicated via sources who wished to remain anonymous (and again, how can anything be done about alleged fraud when those purportedly in the know stay anonymous?).

And good for him - he's doing his job as a leader in the industry, tackling the issues, seeing what is going on around him, understanding the competitive, regulatory, legal and compliance landscape.

Bill Zachry, Group Vice President Risk Management at Albertson's is another leader who doesn't shy away from conferences, attending sessions, scouting the exhibit hall to see, as he puts it, where the money is going.

But there frankly aren't a whole lot of other top tier executives that you'll see at any big conference.

Why is this? What is so ponderous about cavorting with the minions that do the day to day duty of ensuring the workers' compensation system operates?

Leadership to commit the resources necessary to make this industry attractive, to get good people in so that good work is done, to challenge the status quo and use imagination, engineering and above all else, commitment to make workers' compensation operate as well as it can given the laws, regulations and limitations of the system.

Like mountaineering, workers' compensation has its own community of people who have the knowledge and skills to manage the intersection of medicine and compensation.

Workers' compensation is changing. What we have today is vastly different than what existed 20 years ago, and will be vastly different in the next 20 years - it's happening all around us: mergers, assimilations, options, convergence of health and comp...

In other words, we have all these people in this industry that are going in all sorts of directions, but there's a lack of demonstrable cooperative leadership near the top of the mountain and a storm is coming.

There's your challenge top tier, C-suite, executives. Don't just glad hand at shows and play golf with colleagues. Go to sessions, talk to your vendors, talk to your customers, absorb what is happening with the weather on the mountain.