Disclaimer - I'm no economist. I leave that stuff up to Bob Hartwig and his team over at Insurance Information Institute.

I just know what I know, and the older I get the more I don't know.

Still, in the world of workers' compensation there are some basic, simple facts that we tend to forget as we get swallowed up in the mire of data that either supports or contradicts our theories and actions.

The single most basic fact about workers' compensation is that it doesn't exist unless there are businesses that employ workers, and there are workers at those businesses. 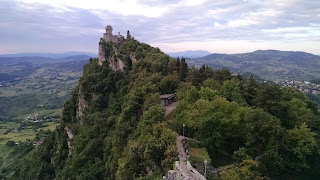 Bottom line - without work there's no work comp, nor an industry to support it.

This fact was last made painfully aware to us in the Great Recession, when premium dollars dried up, and 2010 saw one of the single biggest jumps in claim frequency in many, many years, producing a couple years of negative combined ratios, followed by years (and continuing) of abysmal investment returns.

And just when we think things are getting better, the global economy gets challenged, which challenges the domestic economy, because in this new world everything is connected.

The Wall Street Journal yesterday ran a story about the ongoing recession (didn't we escape that a couple years ago?) - not an overall recession, but the hard times befalling the industrial sector.

“The industrial environment’s in a recession. I don’t care what anybody says,” Daniel Florness, chief financial officer of Fastenal Co., the WSJ reported he told investors and analysts earlier this month. Fastenal is a NASDAQ traded company and its stock has been trending downward over the past year.

The reason the stock has been slipping is because its customer base isn't buying the nuts, bolts and other factory and construction supplies the company makes. According to the story, Florness said that a third of Fastenal's top 100 customers have cut their spending by more than 10% and nearly a fifth by more than 25%.

That story is repeated by other big, industrial stocks. Caterpillar Inc. last week reduced its profit forecast, citing weak demand for its heavy equipment, and 3M Co., whose products range from kitchen sponges to adhesives used in automobiles, said it would lay off 1,500 employees, or 1.7% of its total, as sales growth sagged for a wide range of wares, according to WSJ.

Energy prices (i.e. oil) has favored fuel consumers, but has killed domestic production and the need for drilling equipment and supplies. China's troubles, including its own interest rate cuts, have stemmed that country's needs for US goods, and other emerging markets such as Brazil aren't able to take up the slack.

According to the WSJ story, profit and revenue are falling in tandem for the first time in six years (six years ago we were in the throes of The Great Recession), with a third of S&P 500 companies reporting so far. Sales are also on pace to fall 4%—the third straight quarterly decline (and we're going into retail's customarily biggest season). The last time sales and profits fell in the same quarter was in the third period of 2009 says the Journal.

Last year, outgoing NCCI president/CEO Stephen Klingel in his State of the Line address opined that the industry was stable and that the future looked promising, but he couched that forecast with some skepticism about the future, and that skepticism seems foretelling. Pricing is being challenged, rates are going down (okay, except in California), investment returns are stagnant ... but claims frequency and severity is ameliorating too.

True - there are sectors that are defying the global troubles: tech, health care, autos, air travel; and most economists don't see a meltdown or overall damage to the economy.

But even construction, which is a high rate, high premium sector for work comp may be a challenge because, believe it or not, the home-building industry is saying they can't find labor to keep up with demand, and the most recent reports show that new home sales are actually cooling off.

It seems the financial world of workers' compensation is challenged. Low interest rates on renewing bonds squeeze investment gains (if at all); high margin risk categories aren't generating the payroll to fortify premium sales; foreign investment in US assets is waning; and the strong dollar abroad is pinching the export/import markets.

Oh, and good heavens, there are economists that are now saying Americans are saving too much!

On top of all this, we are in the midst of radical changes to when, where, how and who does work (and who pays for that work).

That's a radical concept - it's not the machines, the land, the buildings, the inventory that's important to the 21st Century business, but the people that make that business happen.

And people is what workers' compensation is all about - it takes people to hire people to do the work that people want done to produce the goods and services that people will buy....

So wait! Maybe work comp isn't doomed - the concept of how that insurance is bought, used and/or applied is just changing.

Many industries in the past used to be thought of as capital intensive, which created barriers to entry: transportation, lodging, information...

What we are seeing though, is that technology is enabling the redistribution of risk, and therefore capital requirements are not so intensive any longer: Uber, AirBnB, Facebook and Google - each of these new generation businesses have in common a basic business fundamental of redistributing the risks of operation making the revenue/profit per employee (i.e. asset) much, much higher than traditional models.

The old capital intensive requirement is a part of what we like to call "friction" but as this "new economy" is showing, that friction is being reduced dramatically. Work that used to require factories, offices, commuting, and risk, is now delegated to the most competitive workers throughout the world - what is now called the "gig economy".

So maybe work comp carriers don't need that much capital other than what the law says. Maybe the industry's traditional financial thinking is looking too much at the past, rather than recasting for the future.

There's a lot more to this story than I can give credence because there are so many moving parts.

Workers' compensation is over 100 years old; and while you can't teach an old dog new tricks, you can build upon the foundation.

I think that's what is happening - and we're seeing this happen before our eyes at a pace that is relatively slow so that the disruption is not as abrupt as in other industries. Berkshire Hathaway, Insureon, Intuit, and others, are all moving towards digitization of the workers' compensation insurance market.

Short term, the traditional stalwarts of work comp will be challenged. Over time, though, as efficiencies work their way into the economy those efficiencies will be translated to the work comp insurance line. I think we're going to see some exciting, new, and radical changes in the next decade as our "old world" industry becomes imbued with new world understanding.
Posted by Unknown at 4:09 AM