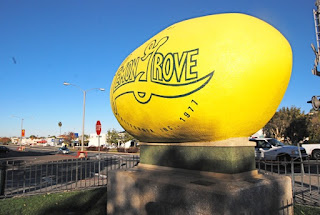 Three thousand five hundred miles away, at the Workers' Compensation Institute's annual workers' compensation mega-fest in Orlando, Florida, and I find out that Californians still don't have agreement on a) what a first aid injury is, and b) whether it has to be reported.

There are some employers, of course, that have no regard for their employees, and thus don't want to report any injuries because they believe, rightly or wrongly, that doing so will affect their insurance premium. These employers seem to generally have poor management systems in the first place, if at all (recall the contractors in the news recently, going to jail for the death of a worker - that employer displayed a callous disregard for employees, and for any rules frankly, which is why the judge "threw the book" at them...).

But an issue has arisen in California over reporting of "first aid" injuries. The Workers' Compensation Insurance Rating Bureau wants carriers to report everything to them, including first aid injuries. State Compensation Insurance Fund had not been doing so, but capitulated to WCIRB desires in January of this year, and has issued a mandate to its insured employers requiring them to report those injuries.

This has raised a bit of a fire storm, because there isn't any law requiring the reporting of first aid injuries, and in fact the law implies differently.

California Code of Regulations Section 14001(a), "Reporting of Occupational Injury or Illness," and Labor Code Section 6409.1 both require every employer to file with the Department of Industrial Relations a complete report of every occupational injury or illness that results in lost time or that "requires medical treatment beyond first aid." The section defines "lost time" as absence from work for a full day or shift after the date of injury.

Labor Code Section 5401(a) defines first aid as a one-time treatment and follow-up visit for the purpose of observation of "minor scratches, cuts, burns, splinters or other minor industrial injury, which do not ordinarily require medical care."

But the WCIRB last year formed a working group to study the issue, because it was concerned that some employers were getting away with non-reporting, and because injured workers whose conditions deteriorate could experience delays or denials.

A summary of the small medical-only claims working group meeting in February 2014 posted to the WCIRB's website declares, "Neither the California Labor Code nor the standard policy contract provide for a first aid exception to the insured employer's responsibility to report a workplace injury or the insurer's liability to pay the cost of a workplace injury."

The summary also said the insurance commissioner's regulations in the Uniform Statistical Reporting Plan and the Experience Rating Plan do not have an exception for reporting first aid injuries.

The best job I ever had was while I was in college at a local mom and pops hardware store in Lemon Grove, CA, called, of course, Lemon Grove Hardware.

And I learned about workers' compensation.

I had "graduated" to fixing screen doors and was trimming screen material after an installation when the box knife slipped and I sliced my finger. I frankly didn't think much of it. Blood was all over the place but I quickly wrapped it with a shop towel and began finishing my work.

Olin was frantically concerned. I argued with him for probably 5 minutes about whether I needed stitches or that I was even injured. Olin insisted that I go to the doctor, and repeated that I need not worry about the medical expense because it was covered by something called "workers' compensation."

Workers' compensation - what a concept! I had no idea, probably like the vast majority of workers, regardless of whether they are fresh into the work force or experienced laborers...

So off I went to urgent care, took a couple stitches in the finger, and returned to the best job I ever had.

I did not return to the doctor afterwards. I removed the stitches myself (having probably way too much experience doing so with prior non-industrial injuries).

Frankly, Olin could have considered that "injury" something that would need just "first aid." I wouldn't have known any better and I personally didn't think that sewing up the wound was necessary. And regardless, my "medical attention" required only one visit to a doctor for a minor procedure.

He was thinking of ME, his employee.

So what's the big deal about reporting minor first aid only injuries?

The WCIRB's particular interest isn't the employee, but acquiring data on all injuries for a more complete statistical picture. They have a job to do.

It's really about whether or not an injured worker is going to receive, or be denied, treatment and other benefits later on down the road.

If not reporting a first aid injury results in a delay or denial later down the road, then that's reason enough to report all injuries, regardless of severity (or lack of).

As risk management consultant and CompMetrics owner Bill Cobb noted in the WorkCompCentral story this morning, the effect of a small claim that only requires stitches would work out to a "rounding error" on an employers' X-mod.

First aid is an exception to reporting, and as we know, make exceptions and exceptions get abused.

All injuries, and claims of injury, should be reported, even if originally minor.
Posted by Unknown at 3:36 AM