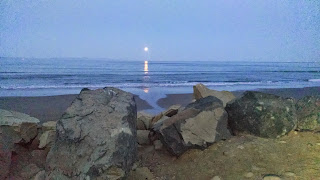 I think my first real experience with traumatic brain injury was when I was about 8 years old. My younger brother and I were having a rock fight because that's what we did when the parents kicked us out of the house (which was all the time). My brother was across the street - a good 30 to 40 feet away. Neither of us ever figured we would actually hit each other... I had just finished my shot when, "WHAM," I took a stone right between the eyes. Lots of stars. Little bastard...

But my experience with TBI didn't stop there, because I was an "active child" (okay, hyperactive, but at least my parents didn't put me on Ritalin, like my brother).

I was around 12 years old when, racing bicycles around my friend's yard, I lost traction around a corner and slammed my head against the asphalt. I was wearing a "helmet" but back then it was just a stupid piece of plastic with no polystyrene lining that didn't provide any force absorption. My glasses broke and I got an "asphalt tattoo" in the side of my face that I still sport. My head went "ding, ding, ding."

There were a couple more minor episodes of head trauma as I grew up but nothing notable, until law school.

During my first year in law school I had taken a bicycle ride from our rental in Trancas Canyon to Venice Beach. Along the way, in the big parking lot adjacent to Santa Monica Beach, I was pulling an epic wheelie on my highly modified, race ready, cruiser bike. My feet were strapped into the pedals, and of course I wore no helmet. I carried that wheelie for hundreds of yards, then over-spun and failed to feather the back brake in time, and looped it. WHAM! That one hurt, right on the back of the head.

That incident happened about 8:30 a.m. The next thing I remember (amnesia took away most of that day, though some memory of it did return) it was about 4 p.m., I was sitting on my bike in that same parking lot and my head hurt. I felt the back of my head with my hand and it was bloody. "Hmmm," I thought to myself, "this isn't good." I figured I'd better call home for someone to pick me up.

I pedaled over to the closest pay phone, and dialed, and dialed and dialed and dialed... I couldn't remember my phone number! I couldn't remember the names of my roommates to get directory assistance. I panicked. I just started punching the keypad hoping some pattern would emerge that would get me connected. Fortunately that worked, my roommate Lydia panicked as well, told me to stay put, and she got me an hour later and took me to the hospital for a couple of days in ICU.

Later that same first year of law school I was surfing Zuma Beach before class - it was going off! Big, deep, shore-break tubes with perfect shape. Spicoli had nothing on me! I slipped into a barrel, and the curtains came down - next thing I know I'm spitting sand out, my board had a huge, head-shaped ding in it, and my ears were ringing like I was a General Telephone appliance.

I sat on the beach for quite a while after that because I couldn't focus, and my head really hurt. I remembered I had class: Contracts with Professor Keyes, who was nearly identical in looks and demeanor as John Houseman's character in Paper Chase. I was late! Don't ever, ever be late to Keyes' class!!! I raced to school, and in retrospect I shouldn't have been racing anywhere, let alone driving.

Class had been in session a good 10 minutes before I walked into the classroom, and when I did all 200 pairs of eyes in the lecture hall, including Professor Keyes, were on me. Gulp... Miraculously, although the entire class halted, Keyes didn't call on, or otherwise embarrass me. I found my seat, next to my good buddy and eventual roommate, ET. He was laughing at me when I said, "Dude, take notes for me. I'm all F'd up..." But ET wouldn't stop laughing.

"What's so funny dude?" Turns out not only did I have sand all over my face and head still, but I even had seaweed hanging off my head.

There's plenty more head injury stories where those came from, unfortunately, or fortunately, if someone wants to talk to me about TBI because I have a lot of personal experience!

One of the very few medical specialties that knows how TBI works and affects people is neuropsychology - the interaction of brain malfunction on cognition and behavior - it is the only specialty that knows how to objectively assess for cognitive impairment.

There is controversy over whether neuropsychologists should be available as a separate sub-specialty in the California Qualified Medical Examiner selection process. The Division of Workers' Compensation is removing the specialty as a separate Qualified Medical Examiner selection choice, but there is a bill pending in the legislature (AB 1542, Mathis, R-Visalia), that has passed virtually unanimously through the process, that would ensure neuropsychologists would remain available as a QME choice.

For more than 20 years, injured workers and their attorneys have been able to designate the neuropsychology specialty when requesting a QME panel. But that changes tomorrow, Sept. 1, under rules the Division of Workers' Compensation adopted on Aug. 12.

The DWC said in its Initial Statement of Reasons published in March, when it introduced the proposed rule changes, that it was eliminating the designation because the Medical Board of California does not recognize clinical neuropsychology as a specialty.

The DWC announced its intent to adopt those rules on July 21, after AB 1542 was already passed unanimously by two committees in the Assembly as well as the full Assembly itself. The Assembly voted 79-0 to pass AB 1542 on July 16. There is no indication in any bill analyses that the DIR was opposed to the bill at that time.

But five days later, the DWC said it would adopt the rules eliminating the neuropsychology designation despite the pending bill.

And a week after that, DIR Director Christine Baker wrote a letter to Assemblyman Devon Mathis, R-Visalia, that the administration was opposed to the bill he co-authored with Assemblyman Ken Cooley, D-Rancho Cordova because the administration is concerned "the California Board of Psychology does not recognize neuropsychology as a subspecialty in psychology."

There is also an umbrella board certification group, the American Board of Professional Psychology, that recognizes neuropsychology as a unique specialty.

And, while plenty of other specialties could involve expertise, neuropsychology is the only area of expertise which allows for the objective assessment of cognitive impairment, according to folks I know in the field.

Noting the curious timing of the regulatory change, and the apparent attempt to have regulation trump legislation, Mathis wrote to Thomas Dyer, chief deputy legislative secretary in the governor's office, that, "It is immaterial that the AD may currently have a different policy."

By the way, Mathis received the Purple Heart for a traumatic brain injury he sustained in 2008 while serving as part of a U.S. Army transportation unit in Iraq that was targeted by insurgents.

So I asked Christine Baker, Director of the Department of Industrial Relations, which oversees the DWC, what's up: Neuropsychology has been an option for 20 years, so why now? And what was the urgency in moving up the implementation date of the regulatory change from October to September? What's the big deal about amending DWC policy to provide for a nationally recognized accreditation rather than eliminate a choice?

Baker wanted to put the current controversy into historical context, indicating that any timing relative to AB 1542 was coincidental.

Baker explained that before her time as Director, in 2009, the overall QME regulatory process was reviewed and the DWC decided that it would be best to only authorize for QMEs specialties that were recognized by California medical boards. This was when chiropractic was, frankly, running amok in California. Consequently a large number of subspecialties not recognized by state boards were eliminated.

Baker said that neuropsychology was left in by error.

Then in April 2015, the division moved to automate the QME panel process. Since this is a state agency that move required regulatory action to implement. Consequently, the division decided to clean up the QME process to make it consistent with existing policy, which meant removing neuropsychology as a subspecialty.

Baker said it was at that point that parties interested in the issue went to the legislature.

In response to my question about limiting access to examiners who were particularly qualified to deal with TBI and other cognitive challenging injuries and disabilities, Baker said she thinks that in fact the move will provide better access to the public for the right kind of doctor; if we went by the legislative recommendation then only 6 QMEs would be qualified by the American Medical Association, and only 12 by other boards, for a total of only 18 QMEs total, as compared to 157 QME psychologists in total.

And if the California Board of Psychology wants to recognize neuropsychology as a specialty, then that would be a different matter.

Baker also argued that the treating doctor or a panel QME can request neuropsychology testing and interpretation when necessary so there should be no issue in making determinations on cognitive impairment; the parties need to ensure that the evaluating QME makes the request for testing when appropriate.

And, or course, nothing prohibits going to a neuropsychological Agreed Medical Examiner.

So where do I stand? What do I make of this controversy?

At first I thought that maybe some powerful interest groups were trying to limit exposure to TBI disability claims, like perhaps the NFL. I think my imagination, however, was out of control; clearly that conspiracy theory doesn't play out well.

Maybe the numerous TBIs that I've experienced have denigrated my cognitive capacities. That is certainly a plausible theory, because after hearing all the arguments, reading the bill text, understanding the positions, I still don't get it ...

Frankly, I don't think it matters one hoot whether, or not, neuropsychology is an option in the QME panel selection process. It would be nice to get the right doctor at the right time for the right person and reason - but that's a crap shoot anyhow in the present system with or without sub-specialties.

In truth, this whole affair is looking at the finger that is pointing at the moon, rather than at the moon itself. We have a bigger mission to accomplish.

The APA formally recognized the specialty of neuropsychology, but they do not certify specialists in neuropsychology or any other specialty.
Posted by Unknown at 4:19 AM