Becky was severely injured in an industrial, single person, motor vehicle accident. Her injuries resulted in signifiant disabilities and chronic pain. She attempted all of the usual pain management modalities for a few years. Nothing seemed to work.

This is a success story: 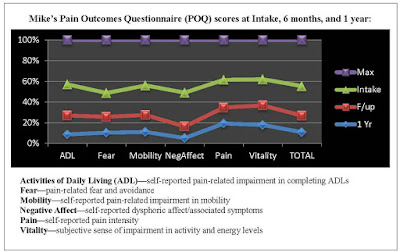 Mike* is a former construction worker who was injured doing search and rescue work.  Despite several corrective surgeries, he has suffered with chronic pain for 8 years, limited mobility, anxiety and depression, diabetes and high blood pressure.

Pain the entire length of his body—the severest involving his leg—made it difficult to walk, climb, and carry things.  He could no longer work.  Furthermore, he had abandoned a healthy social life in order to hide his depression from friends.  He was no longer doing woodworking or fishing and camping—activities he had been passionate about.  He was referred to TCC by his disability insurance case worker for pain-management coaching.

With help from his coach Mike dug deep to envision his life not dominated by pain.  He imagined being able to do the things he enjoyed—fishing, camping, woodworking, family outings, and getting restful sleep.  In the end, he wanted to know his life contributed to his family and community.

Once a week Mike met with his coach and participated in a group call with others living with pain—a facilitated session that combines education and pain-management strategies with community support.

Mike had never had someone to lean on. His fear of talking about the pain and depression was gradually replaced by a small glimmer of hope.

Within two months he was exercising, sleeping better, and reconnecting with friends.  Conversations with his coach were less about pain and more about what he wanted to accomplish.

By six months, Mike had cleaned up his shop, become a city councilman, and taken his wife camping.  He reported feeling much less pain and depression.  His POQ came in at 68 (compared to 122 at intake).

Mike continued to increase his activity levels—traveling, camping and fishing, getting a part-time summer job, and volunteering.  Instead of dead ends, he was seeing possibilities, even with his physical limitations.

Upon completion of the program, Mike no longer needed pain medication, he was working a part-time job and fulfilling his duties as Councilman, and his POQ was down to 46 from a starting score of 122.  With his self-management program, Mike continues to live with reduced pain and increased vitality as he explores the possibility of starting a home-based business.
*****************

What is important in the Mike's story is not only about beating the burden of daily pain, but his realization that life is going to move on, but now his role is changed.

It's not just the pain associated with an industrial accident (or any life altering injury and disability) but it's the adjustment to a new order in life - THAT's a critical part of the "outcomes" equation that we all too often miss and/or ignore.

People like Becky Curtis, Dwight Johnson, and of course Mike above, all came to the realization after dealing with chronic pain and disability that life has changed for them. The same routines don't apply any longer. There's a new life paradigm.

The key is accepting the new paradigm, and having the courage to move on to that new path and direction.

If you know someone who has mustered the courage to face their new life's paradigm, or someone who has been instrumental in helping an injured worker find their place, please nominate them for a Comp Laude award (https://www.workcompcentral.com/gala-voting). Nominations close August 31.
Posted by Unknown at 4:40 AM