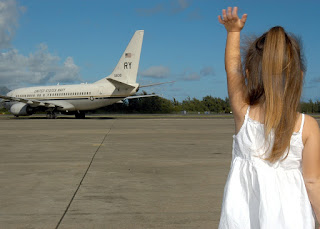 A simple wave from an airliner to a little boy may change that boy's life forever.

Reported out of an Albuquerque, New Mexico, news station, KRQE, is a heart warming tale of how a simple little act can make such a huge impression.

In July, 5 year old Hudson was at the airport with his grandfather, waving at planes as they taxied by. Hudson was getting discouraged because nobody was waving back.

Southwest Airlines pilot, Mike Hickey, noticed this as he was taxing his Boeing 737 to the runway, so he pulled a little closer than normal to the fence and he and his co-pilot opened the window and waved back.

Hickey told the station that he waved because he remembers being in Hudson’s shoes, waving at planes at Dallas Love Field when he was his age.

Trisha Hughes, Hudson’s mom, took a picture and posted it on Facebook with a thank you. Southwest saw it and decided to arrange a face-to-face meeting between the boy and the pilot.

Hudson says because of the wave, he now wants to be a pilot when he grows up. Hickey took Hudson into the cockpit of the 737 to show him "the office."

There are some professionals in the workers' compensation industry who "wave" to children every once in a while, and the impact on their lives is immeasurable.

You have likely heard of the organization. There is a national arm, and there are 29 state and regional divisions too.

Kids’ Chance mission is to provide need-based educational scholarships to the children of workers who have been fatally or seriously injured on the job. It's a simple mission, which is why it is so worthwhile.

According to the Albuquerque news report, Hudson drew a picture of "the wave" and gave it to Hickey as a present at their meeting.

“It’s for my pilot,” Hudson said. “Because he waved at me and that was really polite.”

Waving back. It's a simple, polite, act that can change a person's life.
Posted by Unknown at 4:19 AM