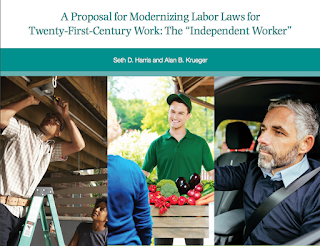 All the talk in workers' compensation about alternative systems has been about opt-out.

Now, a couple of professors, and Congress, is thinking about creating an "opt-in" system.

The next day a symposium, "The Future of Work," was hosted by U.S. Secretary of Labor Tom Perez on Thursday in the capitol.

In the workers' compensation industry we argue about efficiencies, costs, and details of coverage.

But, we also know, when we "look at the moon," that the administrative nature of modern workers' compensation systems is an important component of the economy and society, and that it is fundamentally a very good concept.

And we also know that there is growing discontent with the disparity between state systems, the inequity of benefit levels and how systems are administered, with some calling for federal oversight and standards.

Kreuger and Harris posit that while the tort system may be the best solution in some cases, overall, workers' compensation can be more efficient than civil litigation.

This had Harris and Kreuger arguing that the federal government should take the lead in establishing an opt-in workers' compensation system to cover Independent Workers - that new class of worker (some call them Dependent Workers...) of the Shared Economy exemplified by Uber, Lyft, AirBnb, DoorDash, GrubHub and others.

“Congress may have to act if the courts all across this country reach varying and confusing decisions,” Kreuger said during a roundtable discussion following the publication of the report. “It’s quite possible, in some jurisdictions, courts will say, under the same law, that they're employees and others are independent contractors. And that’s not a healthy environment for the economy."

Harris, said during the same discussion, “God forbid judges get involved. Then we’re going to end up maybe even worse off, because it’ll be decisions in particular cases with respect to particular sets of facts about particular issues,” adding it might take an act of Congress to get a comprehensive solution.

“We therefore propose that intermediaries be permitted to opt to provide expansive workers’ compensation insurance policies to the independent workers with which they work without transforming these relationships into employment," the authors conclude.

Intermediaries would receive limited liability and protection from tort suits in exchange for this no-fault insurance coverage. And while states would provide the legal framework within which the policies would operate, they would not operate the systems themselves.

States could also require that the policies provide the same level or a higher level of protection to independent workers than their workers’ compensation systems.

“While opt-in and voluntary systems of insurance can create adverse selection and moral hazard problems," because of the potential that only those businesses whose independent workers are more likely to be injured opting to buy the policies, "experience with these policies could inform design changes that might reduce these risks over time.”

Parenthetically, in our industry, we have referred to those changes as "reform," with its own set of problems and concerns.

Intermediaries would also have the right to opt out of the system and be subject to tort actions if workers’ compensation policies are prohibitively expensive say Kreuger and Harris.

I had assumed with enough political noise that eventually Congress might rattle cages with a sword and threaten some sort of oversight or program to rectify disparate system differences in state programs, but this is an all new twist that could provoke the same sort of change.
Posted by Unknown at 4:20 AM