My maternal grandfather lived with us when I was growing up.

We called him "Daddy Harry" at his insistence. His legal name was Harry David Bonacci, given to him "by Decree of court from Enrico Davide Bonacci, as part of the Naturalization" according to the testament by Deputy Clerk Martha Stone for Clerk William H. Tallyn.

He was forty seven years old, five foot six and 130 pounds on April 1, 1946. That was thirteen years before I was born when he became an American citizen. He'd immigrated thirty three years earlier, started a trucking company with his five younger brothers, which grew from a single bob tail into the biggest transport company on the East Coast.

Prohibition was in full swing back then, and my grandfather knew that good money could be made, with little risk, by transporting the raw materials needed by the moonshiners.

But his love was mechanics. After getting the business going he handed over management to his brothers so he could run the maintenance shop. Back then the trades were valued, and there was such a thing as a "master diesel mechanic."

That was my Daddy Harry. 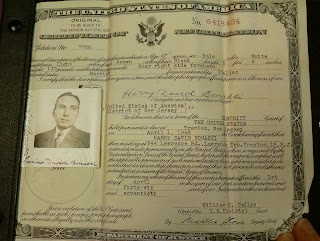 Of course he was retired when he came to live with us. He was separated from my maternal grandmother - she lived in Phoenix, AZ. I recall in my teenage years my parents "forcing" the two to live together, and that was a bit acrimonious, and a story for another post.

I still have many of the tools he passed along, and what I don't have my brother does.

As my brother and I grew older we would tease our grandfather about his mechanical skills. He of course was an extraordinary mechanic, and seemingly could fix, or build, anything, even with the most basic of tools.

Which led to a phrase we would attribute to Daddy Harry, but really we made it up as descriptive of his mechanical prowess: "If it doesn't fit ... use a bigger hammer!"

Following that philosophy is dangerous of course. Making things fit by pounding away with a bigger hammer will, in most cases, just ruin whatever is being "fixed." If you're successful in making it fit, generally the fit won't last long, and the collateral damage to the object being "fixed" can be irreversible, or at least more expensive to repair than had finesse and the proper tools been used in the first place.

We seem to use a bigger hammer when it comes to things in workers' compensation.

And the results are predictable.

In California we used a bigger hammer in 2012, and we made things fit pretty well, at least temporarily.

But the problem with that brute force was that the fit tolerances were sloppy. This may be why the Workers' Compensation Insurance Rating Bureau is finding that the first part of 2015 is reflecting an increase in medical costs, running contrary to the first two years that SB 863 hammered those costs down.

Though still well under what the system started out with prior to SB 863, 2015 is showing so far a 4% increase over 2014 - largely due to utilization, or the number of services being provided (as opposed to unit costs).

And utilization is what drives medical inflation in workers' compensation.

What's interesting about this trend is that Independent Medical Review should impact utilization - and for the first two years that's exactly what happened; utilization following SB 863's implementation of IMR dropped significantly.

But the mix of utilization may be changing, causing this reversal in medical inflation. We know, based on recent research by the California Workers' Compensation Institute, that most requests for treatment do not get challenged, and that compliance rate has been growing, which probably reflects adjustments to the environment by medical vendors.

My Daddy Harry used to nap in the television room every afternoon in his recliner. He would snore "like nobody's business" (a phrase, by the way, that he used to use often), mouth wide open, facing the ceiling, lower jaw moving rhythmically to inhales and exhales. I recall vividly the beautiful dental work Dad had executed so nicely displayed to all the world...

The challenge for my brother and I was to input an index finger into his mouth while open, and withdrawing it just in time before being "bitten." The game was to see how long we could pull off this stunt before waking our grandfather.

And when he woke he would yell at us, "Why you little monkeys!"

Of course we snickered, and took on the challenge another day during another nap. It never got old. We just couldn't resist the bait of Daddy Harry's undulating orifice, the rattle of his sinus cavity and the eventual interruption of his snoring when he sensed a foreign digit in his mouth.

Kind of like the workers' compensation medical game. The challenge of not getting an index finger bit is just part of the fun. How long it can go is another part of the dare.

And eventually a big hammer is brought out to try and fix things, and when that doesn't seen to work an even bigger hammer is used until all has been forced back into place.

Daddy Harry never really told us to use a bigger hammer. That was a fiction my brother and I concocted because it was fun.

So was the finger game.
Posted by Unknown at 4:10 AM

Email ThisBlogThis!Share to TwitterShare to FacebookShare to Pinterest
Labels: IMR, liens, UR