We were short and final for runway 22 at Catalina Island's Airport in the Sky yesterday when I decided to go around because we were too fast.

Just as I input full throttle a voice came over the radio, "check landing gear."

THAT's why we were so fast! I had failed to lower the landing gear.

How did this happen? I have 1500 hours of flight time, and over 800 of that is in Forty One Mike, and have never failed to check for landing gear deployment.

I thought about how that could have happened while relaxing with a cold one that evening in my lounge chair. 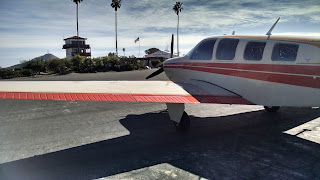 It was a WorkCompCentral director's meeting - we decided a day away from the office after all of the hustle and bustle of Comp Laude the weekend before so we could have some quiet time.

The conditions were perfect for a trip to Catalina and a Buffalo Burger - calm, clear air and modest temperatures. Wednesdays aren't too busy in the Los Angeles Class Bravo airspace and I figured Catalina wouldn't be too busy either.

The flight itself to the island was non-eventful for me, the pilot, and the passengers were thrilled with the view and stability of the flight.

Forty One Mike circled KAVX into pattern altitude for a right traffic entry to runway 22. On the downwind I sighted the touchdown zone and kept an eye on it as we turned right.

I felt for the landing gear knob and activated it, focused on the runway because Catalina is an "aircraft-style" landing - the runway sits atop a mesa with sheer cliffs on both sides, and it is steeply angled with a hump in the middle that causes a distortion from the normal cockpit view.

Forty One Mike was also heavy, with close to 800 pounds of humans aboard and only about 10 gallons of fuel burned off, so its handling was a little slow and ponderous.

And the passengers were gawking with delight.

In other words I was distracted.

As Forty One Mike was turned into final I reached to lower the last step of flaps, but it was already there - weird I thought.

Nor did I check, as my habit and per check list, for "three green" - the three landing gear indicator lights illuminate green when the gear is fully deployed down and locked.

Normal approach speed in Forty One Mike is 80 knots with 15 inches of manifold pressure - but she wouldn't slow to less than 100 even at idle, so with about 100 feet of altitude to go to touchdown throttle went in to full power and I initiated the go-around.

All the clues were there, and yet, I almost got caught in a gear up landing.
This is a lesson we learn all the time in workers' compensation.
If things aren't the way you're expecting them to be, then they probably aren't...

In Ohio the mayor of Toledo died after an auto accident from a heart attack while in route following a snow storm press conference. The Bureau denied the claim, presumably based on the going and coming rule, but that was reversed by the Industrial Commission because substantial evidence reflected that D. Michael Collins often traveled the route home to check on road conditions. The Bureau is now seeking appellate review.

In Nevada some tweaks to the medical fee schedule for hospitals and ambulatory surgical centers should not cause more than a point four percent increase in medical costs in the state, but a study released last month by the Workers' Compensation Research Institute largely confirmed that you can't predict future behavior on past performance; reimbursement rates have a disproportionate affect on what procedures are deployed.

And in Pennsylvania a 48 year old field maintenance worker, with a long history of heavy smoking, hyperlipidemia, and family history of coronary artery disease died after working a 14 hour day in cold weather performing hard physical labor under stress. The substantial evidence standard supported the claimant widow's appeal for death benefits over the defense opinion that a heart attack was inevitable, and it just so happened to occur at work.

There are, every day, clues that should cause us to consult the check list. Things aren't what they seem. Sometimes the courts have to remind us. Sometimes history is not a good indicator of future performance.

As we were climbing out for the go-around another voice came over the radio.