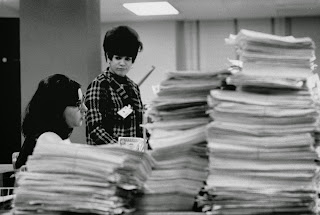 On Friday I quoted blogger and principal of Health Strategy Associates, Joe Paduda, about physician's reticence to complete paperwork.

Paduda opined that physicians would be loath to move claims from general health to work comp because of the extra paper work, stating, "documentation that is perceived by physicians as irrelevant to patient care is the discontent of doctors - seems to me that's the definition of workers' comp."

The latest Texas biennial Performance Based Oversight (PBO) report seems to bear that out - that report showed an alarming minority, up to 25%, of workers' compensation treating physicians surveyed failed to complete or filed required work status reports timely or accurately.

Work status reports and back-to-work documentation are two of four categories under which doctors are assessed through the biennial PBO process for health care providers. Other categories are timeliness in filing medical evaluation forms and filing documents supporting their use of magnetic resonance imaging. Doctors file both forms with insurance carriers and the state Division of Workers' Compensation.

“The measurements that physicians perform the worst on are the administrative requirements of the DWC, rather than the clinical measurements, which physicians score quite well on,” Warren Cooper, the Texas Medical Association's director of health care delivery services, told WorkCompCentral.

83 health care providers were reviewed in the latest PBO report, published Monday, for the timeliness of their medical evaluation reports (DWC Form-069). 61 were high performers, 18 were average performers and four were poor performers.

High, average and poor are defined by regulation.

But, of the 124 health care providers reviewed for the completeness of the work status report (DWC Form-073), 55 were high performers, 38 were average performers and 31 had scores placing them in the poor-performer tier.

The DWC checked the records of those same 124 health care providers to see whether they had proper documentation of the reasons injured employees couldn't return to work.

Of those 124, 62 were high performers, 41 were average performers and 21 were poor performers.

Of the 33 health care providers reviewed for whether they had proper supporting documents for the usage of magnetic resonance imaging for spinal injuries less than 21 days after an injury occurred, 21 were high performers, eight were average performers and four were poor performers.

DWC says it deliberately expanded the number of physicians subject to audit from the last report, nearly doubling the number reviewed for for work-status forms.

To discourage further physician participation in workers' compensation cases, in addition to paperwork they don't want to complete, poor performers are subject to further review and potentially penalties.

I'm being sarcastic of course, and DWC has good intentions - like much in government oversight though, motivation is provided via punitive measures rather than positive incentives.

The other day the Workers' Compensation Research Institute sponsored a webinar debate between retiring president/CEO, Richard Victor, and Paduda - the theme was cost shifting from general health to workers' compensation.

Victor said their data showed it happening. Paduda challenged the premise and the data, and suggested that just as much shift to work comp was also occurring in the opposite direction, providing the quote at the top of this post.

Regardless, it seems to me that Texas would be a great place to do further research on this topic, starting with the physicians that were surveyed in this latest PBO to see how discouraging work comp paperwork, and subsequent discipline assuming poor ratings, motivated a shift to general health if the circumstances permitted.

Even better would be research on how government could meet its need for data while stimulating physicians to provide that information without resorting to de-motivating measures. It would start by formulating forms that physicians would perceive as adding to patient care, rather than the obviously current perception of irrelevancy.
Posted by Unknown at 4:23 AM