There's so much to comment on this morning that I'm feeling a bit schizophrenic.

But there's a common theme: workers' compensation seems to exist in this vertical vacuum surrounded by a vortex of outside forces that tug and pull on the funnel like a tornado traveling across Oklahoma's prairie lands, taking out interests along the ways, but randomly sparing others.

Speaking of Oklahoma, critics have come forth saying that a recently passed appropriations bill, House Bill 2238, will add about $40 million of costs to employers to fund the workers' compensation system. This has folks upset because it is a set back to the reforms passed 2 years ago, and the critics know that employers in the state won't understand why their bills are going up again, after promised savings. 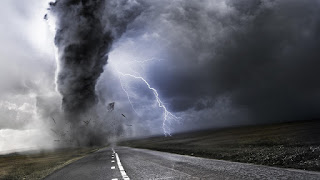 While HB 2238 makes appropriations for the Workers’ Compensation Commission and allows workers' compensation carriers to increase insurance premiums to recoup money paid into the state’s Multiple Injury Trust Fund, it repeals the statute that allowed carriers to recoup only one-third of the assessments from policyholders. Now carriers will be able to recoup 100% of the assessments through premiums if they choose. The bill also ended a rebate program whereby carriers could recoup at least part of the remaining two-thirds via rebates from the state, thus increasing the chances that this cost will be passed along to policyholders.

In Florida workers face an absolute deadline on psyche claims six months after they reach maximum medical improvement for a physical injury, according to the 1st District Court of Appeal.

Like many states, in Florida psychiatric ailments are compensable only when tied to physical injuries. Monday, the 1st DCA said no benefits for mental conditions are payable if a worker is more than six months post-Maximum Medical Improvement of the physical injury, interpreting Florida Statutes Section 440.093(3) quite literally.

The case, School Board of Lee County vs. Huben (2015), 1D14-4476, involved a school teacher, Lisa Huben, who sustained significant injuries to her arm when interceding on an assault by a student on her classroom aide in April 2007.

The claim was accepted and Huben required extensive treatment – including seven surgeries. Huben eventually established that her arm injury left her with a 20% permanent partial impairment – but she continued to teach.

The school district assigned Huben to a position at the West High School Alternative Learning Center in December 2013, but she was unable to bring herself to open the classroom door and enter. Huben then voluntarily admitted herself to Park Royal Hospital – a facility for mental illness and substance abuse – because she didn't understand what was wrong with her.

Her doctors diagnosed her with post-traumatic stress disorder, and an independent medical evaluator opined that she was totally disabled by this condition as of July 3, 2014.

A unanimous 1st DCA panel reversed this award Monday, saying the judge had misapplied Section 440.093(3), and that the statute was a "strict deadline after which no TTD benefits are payable on psychiatric injuries."

This is the state where a trial judge opined that the Florida system no longer meets constitutional mandates, and the 1st DCA sort of acknowledged that: "this holding may lead to results in some cases that contravene the purpose of the Florida Workers’ Compensation Law to 'assure the quick and efficient delivery of disability and medical benefits to an injured worker.'"

Curiously though, Huben's attorneys aren't sure that this opinion is really a set-back in the case in chief, because there is evidence that Huben is permanently totally disabled. That issue is pending a petition seeking such, which would entitle Huben to cost of living adjustments for life.

Finally, 3600 miles to the west, a fight is going on as to whether exclusive remedy protects municipal employers and their third party administrators from bad faith for alleged collusion in the denial and misapplication of benefits.

Fourteen firefighters and police officers in December filed a civil Racketeer Influenced and Corrupt Organizations Act complaint with the U.S. District Court for Central California alleging Corvel and York, third party administrators for the cities of Stockton and Rialto, used "frivolous and legally-unsound" objections to dissuade injured workers from filing claims and cut comp costs for the cities.

The defendants are seeking dismissal of the complaint, saying that allowing the case to go forward would destroy the actuarial assumptions underlying the risk assumption of the cities' work comp programs.

The defendants' position is that the judicial exceptions (in the 1972 California Supreme Court decision in Unruh v. Truck Insurance Exchange and the 2nd Appellate Court opinion in 1981 decision in Everfield v. State Compensation Insurance Fund) to the exclusive remedy of workers' compensation do not apply to "intentional delay and improper denial of benefits, the canceling of previously issued checks, lying to a claimant about benefit payments, committing perjury before the WCAB, or any other conduct that relates back to the investigation of claims or payment of benefits."

That's like admitting that they in fact did engage in despicable behavior, and are now thumbing their collective noses at intended beneficiaries.

Folks ask me all the time how I can write about workers' compensation every single day. It's easy really - work comp is a storm that never seems to stop. There's always something spinning, somebody getting hurt, someone laying blame, seeking insurance, getting denied, disputes, grievances, allegations, finger pointing and unreliable forecasts.

Workers' compensation is just like the weather - folks nearly always have something to say about it.
Posted by Unknown at 4:18 AM