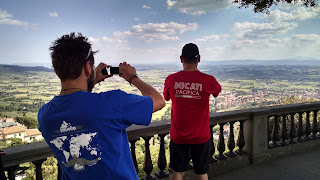 The bottom line, universal truth in workers' compensation is that the absolute cheapest way to close a claim is to get the injured worker "all treatment requisite to cure and relieve" (you’ve read that somewhere before) as soon as medically possible.

Any delay will cause the cost of the claim to rise exponentially. This has been proven over and over again.

In order to accomplish this all of the players have to be on the same page - in other words, each of the independent special interest in the wagon that circles the injured worker (and his employer) need to set aside their interests (usually financial) and work towards the single goal of just providing the treatment.

And this means providing treatment that the employer didn't think they bought when that injury occurred.

The reality is that the employer DID buy all of the "co-morbidities" that arise once an injury is realized because the employer, at the time of hire, takes the employee as he or she is.

Pre-existing conditions that had been managed by the individual will manifest once an injury occurs. At that point, it is difficult to separate the two. The pre-existing condition aggravates the injury, or visa-versa. The two overlap. The employer winds up paying for both – one way or the other.

When the employer is "first dollar" (self-insured and administered) they have a vested interest in managing the claim costs. They take the medical provider to task by insisting on a valid treatment plan. Happily, for the injured worker, it is providing immediate and complete treatment.

While a pre-employment ‘fitness for duty’ physical isn’t the perfect solution, it will identify many cases where the physical requirements of a job and the physical abilities of the prospect don’t match. It may be disappointing to the prospect initially, but it could save them further injury later.

The pre-employment physical should also come with counseling to give the prospect an understanding of the jobs they are physically capable of doing and it might give them incentive to improve their condition. It’s not perfect but it will go a long way to mitigate the problem of employers buying a workers' co-morbidities.

Attached to the "we takes ‘em as we gets ‘em" reality is the long term employee and their on-going health issues. Their physical (or mental) condition can deteriorate over time. It can be self-inflicted (alcohol, drugs, mental illness, dysfunctional personal life, etc.) or it can be something that occurs naturally.

Taking a proactive, WHOLE PERSON, approach is a wise investment for the employer. It’s hard to quantify because it’s hard to prove the negative. How do we know an injury didn’t occur, or was made better, by preventative measures? It takes courage and foresight to change the oil every 5,000 miles when the car only has 20,000 miles on it...

In complete contrast to the self-insured/administered employers are the employers that are covered by the insurance carriers in the "guaranteed cost" programs (the majority of the employer population).

The insured market has no cohesive all in one approach. All the entities (injured workers, medical providers, adjusters, and the carrier) are disjointed. Each "steers their ship at sea" – independent and not in synch with the others. When left to their own devices, everyone will act in their own, independent, best interests - that's basic human psychology.

By definition, then, the insured workers' compensation market has to be a dysfunctional system because of the basic trend towards personal self-interests.

Most employers are covered for workers' compensation liabilities by an insurance company.

An insurance company is a financial firm: the mission of insurance is to deploy capital in a manner that generates the best return on investment possible given the structure of the environment in which that capital is placed.

The only reason an insurance company is interested in reducing costs is to enhance profits, and that's the bottom line. How an insurance company improves profits is based on cash flow and long term investments. Short term solutions where cash is dispensed in large amounts early in the claim are antithetical to Wall Street's focus on current earnings.

This is a necessary dysfunction in the workers' compensation system, no matter where you are. Interests are not aligned because the motivations are different.

Dysfunction leads to inefficiencies – inefficiencies lead to higher costs and poor treatment plans. We see this in every insurance rating bureau graph and report where, for instance, cost containment expenses continue to grow.

The employer and the injured worker each pay in their own way.

Yet there is no way around this dysfunction, at least not without heavy handed governmental intervention, which makes nobody happy.

No, the vast majority of work comp insurance – the guaranteed cost program – will never function what we would consider proper. We may well tear it down and rebuild it, but what would the replacement look like?

Come to the table with YOUR solution to "fixing" workers' compensation, then ask yourself how much of that solution is based on your own self-interest. My bet is if you're truthful the answer is inescapable.

But if you at least admit to yourself that workers' compensation is, by design, a dysfunctional system, you are much further along the way of self-realization than the rest of the industry. And, as in most recovery programs, such admissions are the first step towards function.
Posted by Unknown at 4:51 AM