I hardly ever watch movies.

Unless it's a 13 hour trans-continental flight - then I watch three.

One of them was The Great Gatsby, with Toby McGuire as the narrator, Nick, and Leonardo DiCarprio as Gatsby.

I read the book, by F. Scott Fitzgerald, in college as part of a class assignment. The movie seemed true to the book, from what I recall.

McGuire's character, Nick, is a mental patient whose depression and other psychological maladies are the product of excess and disillusionment born out of the 1920s before the stock market crash, in particular his experiences in New York City.

Gatsby was a great illusion, a fraud, perpetrated ostensibly so he could retrieve Daisy, the love of his life, but the deeper intonations are related to unregulated, incomparable, greed. 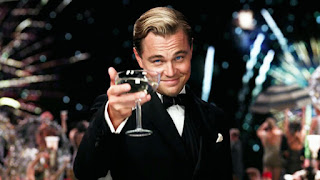 ed and how it destroys people, both the greedy and their victims, from the inside out.

Of course all of this are metaphors for what Fitzgerald saw as all that illed society at that time.

Things don't change much though - greed still is a pervasive disease.

Wilbur Anthony Huff will spend 12 years in federal prison for his greed.

His greed wasn't unlike Gatsby's - a fraud, an illusion.

His scheme led to the collapse of two workers' compensation carriers and left nearly $100 million in liabilities spread across 36 states.

In December Huff admitted defrauding Oklahoma insurance regulators, bribing bank officials and various tax crimes. He agreed to pay $139.4 million in restitution as part of a plea agreement with the U.S. Attorney for the Southern District of New York.

I doubt anyone will see any money. Part of the reason Buchwald denied the continuance is because Huff hasn't yet made any payments on $35 million in civil judgments.

Huff is required to commence restitution payments 30 days after he is released from custody, meaning the first payment could be as late as July 2027. And, he's only required to make monthly payments equal to 10% of his gross income.

Indeed, Huff left in his greedy wake a slew of institutional and governmental victims, and we certainly don't know the extent that injured workers were affected by these schemes, as money dried up for claims and claim guarantee associations tried to cope with the mess.

Florida was the second-largest victim with $18.4 million in losses from Park Avenue claims to cover, according to NAIC.

'Meyer Wolfsheim? No, he's a gambler.' Gatsby hesitated, then added coolly: 'He's the man who fixed the World's Series back in 1919.'

Email ThisBlogThis!Share to TwitterShare to FacebookShare to Pinterest
Labels: fraud