Two women were riding their bicycles on Pacific Coast Highway Saturday morning, side by side, talking. They were moving for sure, but not a particularly expeditious pace; though I'm sure it was quite fast for them despite their non-stop conversation.

It was a slight uphill when I caught them. I had good momentum with me from the prior downhill. Even though it was early in the morning, PCH was already getting busy with beach traffic on such a beautifully postcard perfect Southern California day.

I don't consider myself a "serious" rider. Serious left my mentality about 20 years ago after I stopped racing. I'm no longer serious, though I ride obsessively nearly every day.

I would categorize myself, however, as an expert rider, even at age 56 my pace is much more quick than the vast majority on two wheels, and my riding skills are acutely refined: freewheel trackstands, bunny hop levitations, stoppies, reading traffic, and most importantly, reading other riders because more often than not it's another rider that will take you down. 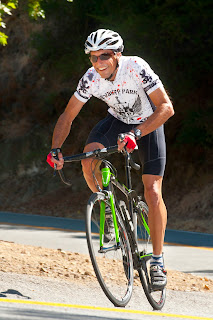 I have learned after nearly 40 years of cycling that, though perhaps impolite, it is much safer to pass another cyclist from behind without announcing one's self. This is a safety practice I learned a long time ago after, you guessed it, being taken down too many times being polite.

The reason is quite simple: one's natural instinct is to turn one's head in the direction of the sound heard from behind. So, if I am passing on the right, and give some audible warning, the rider in front will naturally turn his or her head to the left to catch a glimpse of what just made that noise.

And what happens is that the bike follows the direction of the head turn - ergo, right into the pass on the right.

Try it some time - you don't even need an audible distraction from behind. Ride along, and just turn your head to look behind you and you will notice that your direction of travel naturally follows your head turn. It's natural.

So I passed these women on the right without any warning, which of course surprised the rider closest to me (because, frankly, she was more interested in conversation with her friend next to her than concentrating on her riding).

After her startled gasp, she yelled at me in a disdainful tone, "You should announce yourself when passing!"

Frankly, I was offended. She was the one putting ME in danger by riding side by side with vehicular traffic bearing down us from behind. She was the one NOT paying attention because conversation was more important to her than safe cycling. And just because SHE was startled did not justify her lashing out on me!

I didn't care about offending her - I was, based on my extensive experience and frankly significantly higher level of skill, within my rights!

All too often there is a communication from behind - and we turn to see what it is, taking our concentration off the necessary, fundamental task at hand.

This struck me as completely hypocritical. Why would one want to add value to a workers' compensation claim? How is that even possible?

Think about it - a workers' compensation claim denotes an injury or illness has befallen someone. It is, unfortunately, a negative event. It starts the wheels of comp moving and all sorts of services and vendors jump in with some remedy or solution for some problem that may or may not exist.

Because, frankly, there are people, companies and sub-systems that take and don't return.

They don't "add value" to a workers' compensation claim. That can't be done.

What can be done is to RETURN value: provide benefits (all of them) timely, expeditiously, promptly, without discord or dispute, and any money left over after a reasonable profit goes back to the employer.

A sub-service doesn't add value to anything. It takes value. Sure, some sub-services may be warranted because of certain case circumstances. Those sub-services are an additional expense. If that expense is necessary to get the job done (i.e. move the claim along to closure) then it's warranted; if not, then it's wasteful and adds value only to the pockets of the provider of that sub-service.

That some sub-service that can "add value to workers' compensation claims" is that communication from behind. You'll hear it, you'll turn your head, and you'll deviate from your primary mission. You might even crash the claim.

It's really that simple.

Ride single file and cut out the distracting conversations. The work comp ride will be faster and safer.
Posted by Unknown at 4:17 AM