What if the parent company of Google, Alphabet, Inc., bought one of the biggest insurance companies in the world, AIG?

Citigroup Inc.'s analysts, reported by Bloomberg yesterday, say this is a transaction that makes a lot of sense - shaking up the insurance industry to behave like the tech industry, to foster innovation and create a culture of a higher obligation than just making money off of other people's money...

AIG Chief Executive Officer Peter Hancock in January announced the creation of nine “modules” to improve accountability for managers and add visibility for investors, comparing the company move to one that Alphabet would do. Doing so may help AIG eventually sell or spin off some of the units.

Hancock gave kudos to Alphabet for separating operations and targeting areas of investment.

AIG has been investing in technology, sort of an admission that insurance's staid, risk averse culture, has stymied growth, challenged shareholder value, and destroyed public perceptions.

After the government bailout of a company "too big to fail," AIG's asset base has been halved and now investor activists, Carl Icahn and John Paulson, are seeking further capitulations from the global insurer since its financial performance hasn't been so rosy lately. Yesterday the insurer reported a fourth quarter loss of $1.3 billion and full year 2015 net income was less than half what it was in 2014.

“Many investors think AIG needs a major shakeup. We think insurance as a whole needs a shakeup. Neither AIG nor insurers generally seem to want to take the big steps needed, except incrementally,” the analysts wrote. “The time is right to attempt something big, and the candidates are here.” [emphasis added.]

We know that Google, via Alphabet, has been looking at the auto insurance market. That's a relatively easy market to enter. Autos are a basic risk. Go too fast, wander off the road, keep valuables in the vehicle. .

As a global brand, Alphabet already manages a large share of risk. Bad things happen and the company has plenty of technology and data to determine risks and, ultimately, generate returns covering those risks, particularly when you're a technology company that is already heavily invested in ... technology...

...unlike an insurance company, which is a financial company that looks at technology as an expense, not its raison d'etre. 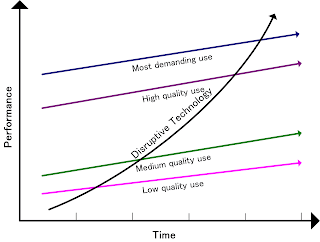 Workers' compensation has a bit more complexity. Jobs are different. State systems are different. Employers, even within the same sectors, behave differently. The relationship between medical and disability involves complex, sometimes opaque, rules.

But there's an underlying fundamental in all of this - understand the risk in real time, which the current insurance industry simply can not seem to accomplish, and then management of that risk can occur proactively.

Unlike the current insurance model, which is very, very much reactive. By the time an insurance company is involved, it's too late - the damage is done.

Think about just paying premiums - there's an annual, or sometimes biennial, premium audit. The insurance company, retroactively, needs to get a better understanding of their risk to make adjustment to the amount of money they're going to ask to cover it.

If the technology were in place, let's say wearables or GPS enabled systems, defining the work place risks would be much more efficient, and would lead to real time assessment and management. An insurance company would know when an inside customer service representative becomes, for a day, an outside sales rep.

Or when an individual suddenly becomes an employee in a shared services economy company.

Or when a truck driver deviates from an assigned route.

We're in a age of disruption. Mobile technology is changing so much of what we do and how we do it.

Insurance has no exemption from disruption, not even the biggest of them. Insurance, and in particular the workers' compensation line, eventually, will be forced to redefine its value and ultimately the beneficiaries will be those who pay for it, and those who call upon it.
Posted by Unknown at 4:11 AM