Friday was, I think, the first business day I did not post in this blog other than when I was on vacation in Italy last May.

Even when I was ill in the past I managed enough energy to get some of my thoughts out.

This past Friday was different. I just couldn't muster the energy to do so. I took a sick day.

That's very foreign to me - sick day. I don't like being sick, and I don't like admitting that I'm sick. So reality bites hard when it comes knocking on my door.

I was supposed to be in Las Vegas for a speech. That didn't happen.

Instead I remained prone most of the day, drenching my shirt and sheets in perspiration, sucking up as much water as my belly could manage, hacking, coughing and discharging mucus with loud, honking noises. 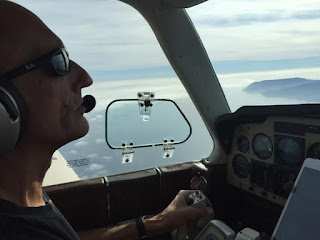 Illness is that sort of vague, I felt like doodie, thing that prevents normal operation.

Saturday arrived and most of the illness departed, but like an engine that's toiled through bad fuel, there was some sludge sticking to the valves. Timing was good and ignition sharp, but the exhaust had some trouble venting.

Which is why my ears didn't clear descending Forty One Mike into Oceanside that morning.

One of the weirdest, and most frustrating, things to experience is hearing through an aviation communications system with blocked sinus passages. It's sort of like talking through the tin cup and string network that we made when kids.

It didn't hurt, it was just weird.

On the ground the pressures eventually equalized and I was able to clear my ears and hear normally (which with tinnitus, means poorly anyhow).

The California Commission on Health and Safety and Workers’ Compensation hearing (pun intended) on utilization review and independent medical review on Friday was like blocked sinus cavities while descending in an airplane.

Researcher Barbara Wynn of the Rand Center delivered the report on UR. Basically she said what everybody has been saying but doing nothing about - it's over-utilized (pun intended, again).

Rand came up with a couple of suggestions: accreditation, an exemption of certain procedures, review standardization - basically more bureaucracy to remedy the existing bureaucratic morass.

In addition to the redundant advice on UR, CHSWC learned that the Division of Workers’ Compensation received 253,771 applications for IMR in 2015, an 11.2% increase from the previous year. Counting only eligible applications (where medical records were provided timely), the division received 165,619 last year, a 13.6% increase.

In other words, the hamster's wheel has gotten bigger.

There's more UR so there's more IMR. That seems pretty basic. While the California Workers' Compensation Institute has mind-numbingly detailed numbers on IMR, the bottom line is that most UR that gets to IMR is affirmed.

The story I'm hearing through all of these statistics, reports and commissions is that there's a lot of people that aren't following the operating handbook.

After all, workers' compensation in California (and in most states) involves guidebook medicine - the rules are written, the guides are in place, the recipes have been published. In California we call them the Medical Treatment Utilization Schedule. Other states use other guides or combination of guides, and they go by different acronyms like ACOEM or ODG...

If medicine is so standardized, then how can so many treatment requests end up in to the black hole of the UR/IMR space game?

Seems to me it's a sinus cavity infection. The path to clarity is there, but there's a lot of mucus in the way.

But here's what we know: Nearly all the time the identity of the claims payer is known. The vast majority of injuries follow well-defined pathways of treatment and disability. And all of that activity is accounted for in a payer's UR processes.

The moment a First Report of Injury hits the claims system the diagnosis reported should trigger the dissemination of accepted treatment protocol, with a checklist, to the physician. In fact, it should occur even before the claims payer gets that First Report.

In other words, even though there are published treatment guidelines, there aren't readily available UR guidelines - so the medical portion of claims proceed into a guessing game. Maybe the request is adequately documented, maybe not - the provider doesn't know until the request is submitted.

The provider should know BEFORE the request is submitted.

Remember we have this marvelous communication invention called the Internet. There's no reason the payer's UR standards for the most common injuries isn't published and readily available, with a checklist for the provider to ensure compliance.

How can one play by the rules if one doesn't know the rules?

I know. It's too simple.

On Sunday the mucus was gone, my sinuses were clear, I could hear (albeit with tinnitus) and everything was back to normal.

That simple.
Posted by Unknown at 4:43 AM

Email ThisBlogThis!Share to TwitterShare to FacebookShare to Pinterest
Labels: California, IMR, RAND, UR