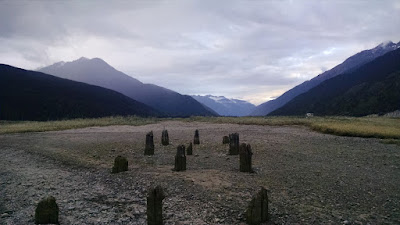 I love TED talks. Not only do I learn new things about our world from people much smarter than me, but the stimulation of my imagination is exciting.

BJ Miller is a double amputee, the product of electrocution when he was in college doing dumb college kid stuff. That experience altered his life. He became a physician, and after traveling that career path, has ended up executive director of the Zen Hospice Project in San Francisco.

His TED talk is about how the health care system ignores the single most universal facet of our lives, something that all of us will experience: death.

Like most really good TED talks, there are several profound moments in BJ Miller's talk; things that resonate with the audience, and certainly with me.

For instance, he talks about being a patient, and the definition of patient, which is one who suffers, "So I guess we're all patients."

And compassion, which means, "literally suffering together."

But the most profound observation that BJ Miller makes in this speech is that the American health care system, and in this instance, the American workers' compensation system (since medical is such an important and integral part of work comp), is designed with injury and illness at its center.

Pause a moment to give the profundity of that thought its due consideration - because it is, at the most basic level, absolutely true.

Workers' compensation's earliest design, which carries through to this day, is based on ameliorating the impact of a work place injury or illness to employee and employer.

From the most elemental step, which is that an injury/illness must arise out of and occur in the scope of employment, to the most defined step, a disability rating, the focus is on injury or illness: what did the injury or illness do and how is it dealt with.

All of the laws, rules and regulations are about controlling the injury or illness: treatment guidelines, fee schedules, statutes of limitations, indemnity restrictions and durations - all of these procedures and constraints are because we have always been concerned with The What - i.e. injury and illness.

As opposed to The Who - i.e. the person.

Even the end goal has been distorted towards The What: Return to Work. We assume that RTW is our end goal because, science and observation has told us, RTW reduces costs and produces a "better outcome," however you might define that.

But that's lying to ourselves.

In the case of workers' compensation, it is the work injury, which could be a loss of limb, could be a back injury, could be some communicable disease, even psychological harm.

Necessary suffering is inescapable. It is why a person seeks medical care, or work comp benefits.

Unnecessary suffering is what happens when the system inflicts its processes onto a patient (remember, "one who suffers"). It is invented. It is not natural.

This is alterable. It need not occur. It can be changed. Unnecessary suffering does not have to be fact.

But it becomes fact because the system, workers' compensation, is designed with injury or illness as its center.

I share BJ Miller's enthusiasm and optimism though, because since unnecessary suffering is invented, i.e. made up, that means it can be changed. It is not fact unless we make it so.

Even with the rules in place, we need not follow them. We are, after all, essentially caregivers: people who care, whose role is to relieve the suffering, "not add to the pile."

Joan Vincenz, Director - Corporate Safety United Airlines, made a very important distinctive point in my interview of her at the IAIABC Convention last month in Chicago: her goal is to return the worker to HEALTH. That's a profound difference from return to work because it focuses on The Who.

That's pretty elemental, and something that gets lost with all of our machinations and compliance efforts. We focus so much on making sure we meet and adhere to rules (be they statutory, regulatory, institutional...) that we miss the single most important, single most basic, component without which there can be no "good outcome": health.

One of my favorite quotes is from former Royal Air Force pilot Captain, Pablo Mason. Captain Mason, who led 24 bombing missions during Operation Desert Storm in 1991, was terminated from My Travel airlines because he allowed a professional soccer player to sit in the cockpit during a flight to alleviate the player's fear of flying, against the rules.

Mason is credited with saying, "Rules are for the guidance of wise men and the obedience of fools."

Indeed ... workers' compensation need not contribute unnecessarily to suffering. That path can be changed.

We're not going to change the system - that's too hard, too disruptive, and there are too many entrenched interests.

But we can change our behavior within the system. The center of design in our behavior must be the patient - the one who suffers. Some call this treating the whole person. Without a doubt, the first and foremost design aspect that we tend to ignore all too often is just treat the person - we'll figure out the cost allocation later.

Job number one, return to health: the general condition of the mind and body with reference to soundness and vigor.

Treat The Who - the person. Not The What - the injury or illness.

If we in the industry can make that happen then "good outcomes" will naturally follow. Failing that, however, is just marketing double speak.