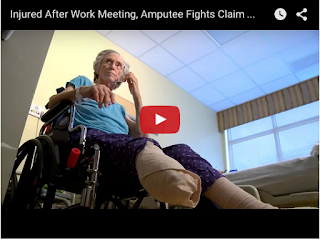 The tune changes when different hats get worn.

"I now understand what they feel like," Jane Hays is quoted as saying in a Texas Tribune article the other day. "We just need to have a workers' comp system that is fair to the workers, the injured workers."

"In a case with serious and disputed legal issues," Randal Beach, Executive Director of Texas Political Subdivisions, a non-profit self-insurance pool administering workers' compensation benefits for local government entities rebutted to Bob Wilson, "the only prudent course of action is to seek a determination from the system set up for that purpose."

Beach refers to Hays' injuries - the 73 year old member of the Board of Trustees of TPS who sustained serious injuries in a car accident returning from a board meeting. The meeting occurred over the course of three days at The Woodlands. Her regular employer, the Temple Independent School District, marked the reason for her absence as "SCHBUSINESS (DIST)," or school business, in computer logs.

She was returning home after the board concluded its last meeting on Saturday, July 11, at around noon. The accident occurred at approximately 1:30 p.m.

The injuries to her right lower extremity required amputation. Hays still faces multiple other surgeries for her injuries.

Hays was highlighted in the Tribune because even though she is an "insider" her claim was denied on the grounds that it did not arise out of or in the course of employment. TPS is claiming the "going and coming" rule excludes coverage.

The "going and coming" rule says that workers' compensation is inapplicable for injuries or claims incurred during the commute to and from work.

TPS says it wants to take the "safe road" because they have an obligation to members, the public and TPS' insurers and reinsurers, to make sure the law is followed.

Hays was a volunteer Director of TPS and is not paid for the job. Instead they paid for her travel, her lodging at the meeting and her meals.

As explained by Beach, "For these meetings, the pool reimburses trustees' expenses, since they are not otherwise compensated for serving on the Board. For workers' comp purposes, the trustees are considered 'employees' of the pool when they are attending Board meetings. When they travel to Board meetings they are traveling to their 'place of work'. The pool does not direct the method, route or schedule of their travel or where else they go on their way to work or on their way home."

But expenses related to the "commute" are reimbursed by TPS as noted above, and TPS directs where the meetings are held (different resorts are chosen - the meetings are not held at "home office").

In other words, TPS essentially controlled the who, what, where and when of "the job."

And Hays, for her part, provided benefit and service to TPS.

But TPS' three legal opinions differed, according to Beach.

"All agreed that to overcome the 'coming and going rule as applied by Texas courts," Beach wrote Wilson, "the claimant would have to establish that the meeting from which she was traveling home was a 'special mission'. One opinion stated that it was a 'special mission' because the meeting was not held at the home office. Another opinion held that the fact that the Board had chosen to hold this meeting at another location did not convert it from a regular meeting to a 'special mission', and therefore the 'coming and going' rule excluded coverage. The third opinion stated that because there were novel issues involved, including statutory differences in the treatment of public and private employees, and legal questions distinguishable from prior case law, the case could go either way. They recommended following the process established by law to determine whether coverage exists."

That's the problem I have with this case - LAWYERS advised going to court, abdicating responsibility so no one person at TPS has to own up to questions by other board members, the public, or, gasp, the underwriting insurance carriers and reinsurers who may be asked to chip in - this is an expensive claim for crying out loud!

Lawyers advising to let the courts decide is like an orthopedic surgeon advising to have surgery - hello!

In a system that is allegedly "no fault" there seems to be enough fault being thrown around to make that a laughable description.

Wilson replied to Beach, "your comments leave me little solace or assurance that the spirit of the Grand Bargain is alive and well. The problem with workers’ comp today on a broader scale is that we are only concerned with doing what is legal, and not that which is simply right."

Beach essentially admits that denials are standard operating procedure for the pool, telling the Tribune, "I have to treat it like another claim. It doesn't matter how much I love Jane, and I do."

If Hays were Beach's mother, I'm sure the outcome would be quite different.

I try to paint workers' compensation as a social benefit.

But cases like this put too much cynicism in the way, because those who are tasked with paying see it as a private loss.
Posted by Unknown at 4:39 AM