"Why do we need cops? Everyone has guns here..."

Our host, Kathy, owner and proprietor of Chilkoot Trail Outpost, a bed and breakfast set of log cabins in Dyea (pronounced "Dii-eeee"), Alaska, gave us her philosophy on law enforcement in The Last Frontier around the campfire the other night as we baked s'mores and drank whiskey.

Kathy's husband, Fred, grew up in the area and Kathy has lived there more than 60 years. She was complaining about the sudden rise in police department personnel, from one to four, in the past couple years. In that part of the country, they take care of their own, and they take care of it by themselves. 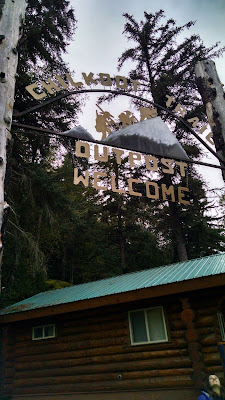 There's a code of common sense and trust. This is sacred Indian land, and also Yukon Gold Rush country, where the city ballooned from 200 to 10,000 within a year in the 1880s, and just as quickly returned to about zero. People in this part of the country trust each other - they have to, because survival depends on it.

My wife Anne and I traveled to the Skagway/Dyea area of Alaska to visit daughter Nichole at the end of her wilderness guiding season, where she was working, taking cruise ship tourists on adventures. The Chilkoot Trail was trodden by "stampeders" over an ancient Tilkit trail to get supplies from Dyea to Whitehorse for prospectors.

The country, as you can imagine, is spectacular. The locals, colorful, to say the least.

But the locals are, in a word, committed. Committed to their environment, committed to each other, committed to their sense of law and order. Everyone has guns because that is an essential tool in the game of survival. There's bears and other things out there that like to eat humans... and sometimes lessons need to be taught.

That community gets lost in the lower 48 around population centers. To us The Law is something that is somebody else's problem - we're too busy dealing with The Internet, Medical Marijuana, Formularies, photocopy shop fee schedules, medical guidelines, and all sorts of other trivia that distracts us from basic missions and purposes.

And, bottom line, Alaskans are used to doing things themselves. They don't have much need for workers, rules, regulations ... and insurance. It's an appealing ideal for which most of us aren't willing to forgo double decaf lattes to live.

We forget that workers' compensation is largely about community. We in the industry have been entrusted to enforce the basic principal - get hurt at work and get taken care of, returned to as much health as possible, then get back to work and continue producing.

Forget about x-mods, loss allocation, formularies, guidelines, ratios, etc. None of that matters in the grand scheme of things. Those are money matters that distract us from what our mission is.

If that doesn't work, then there's guns.
Posted by Unknown at 7:00 AM