Dyea (pronounced "dieee") went from a couple hundred residents to about 10,000 in a year as it was the entrance to the Yukon Gold Rush. Everyone that wanted to get to Whitehorse had to come through Dyea because it was the head of the Chilkoot Trail, the only passage through the mountains to gold country.

But the Yukon Gold Rush didn't last long - about a year - and when the gold dried up, so did the "stampeders" and Dyea was abandoned. 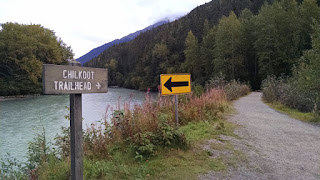 Years later the neighboring city of Skagway, which has a natural deep water port, grew from a hunting and fishing town to support a seasonal tourist industry.


Each town experienced (and still does) major disruptive forces, huge changes in lifestyles. Fortunes were made, fortunes were lost, most people were lucky just to survive. The disruptions were quick and radical, and largely unforeseen but by a few.

Now Dyea is mostly a memory, a few cemeteries, remnant pilings from a dock, and some false store fronts.

Skagway on the other hand bustles during the tourist season with jewelry stores, souvenir shops and restaurants. The town swells by 10,000 when a couple ships tie up for the night, employing a couple thousand seasonal workers.

The world of workers' compensation has for some time been experiencing the disruption that is challenging a lot of other industries. Every state "reform" is disruptive. New trends and unforeseen, unintended results, is disruptive. Old vendors succumb or adapt, new vendors sprout up and some don't flower.

And like other industries, technology is poised to alter in ways we can't imagine, the insurance market place, particularly in workers' compensation.

CitiBank isn't in the business of insurance directly, but I'm sure they are lenders and investors in the market. That gives their team of analysts on the insurance industry a little bit of credibility - it's in their interests to understand what might go on with the market because they make money financing and supporting insurance.

Todd Bault, James Naklicki, and Alex Gifford at Citi recently opined that the Internet of Things, which they have renamed for their purposes, "The Feed," is not only going to disrupt the insurance market in huge ways, but is also going to disrupt the public's interaction with insurance, and I see this especially applicable to workers' compensation.

There's big debate about the shared, or "gig" economy and the tests it is putting on the standard duopoly relationship between worker and employer, independent contract0r versus employee.

Academics and others are starting to argue that there should be a third category, the Dependent Contractor, that blends the stability of the employee relationship with the freedoms of independent contractor status.

In order for that to work there has to be viable insurance alternatives, and what is really keeping the insurance industry from endorsing this sort of change is the ability to know when someone is working as a DC, or as an employee or IC.

There has never been a maybe. Technological advances, the IoT, the Feed, will increase the possibility of a "maybe" category.

Technology, as argued by Bault, Naklicki and Gifford, will enable the insurance industry to determine, in real time, what relationships exists and when (among other important risk factors), and consequently coverage can be tailored to the exact moment in time something bad might happen.

"But the potential here seems higher for commercial lines: with fewer or no privacy issues, and existing pervasive automation, it seems like a smaller step to embed IoT into industrial (manufacturing) and service (venues) processes, not to mention commercial auto activities like trucking and livery," said the analysts. "Employees in certain high hazard occupations could even be wired and monitored, though there could be resistance here."

This isn't going to happen overnight - but a multistage revolution in the insurance industry is, in my mind, certain to happen.

First, since data can be compiled by the insurance providers themselves, they can use that to make a quote and receive a claim, possibly cutting insurance brokers out of the process.

Next, the analysts envision that insurance companies could adjust their prices based on the level of risk being undertaken by the company at different points in the work process and time of day.

"With continuous monitoring of the Feed, we could learn when companies present exposures or not (e.g., the plant is closed, the venue is empty) and with what intensity (e.g., the plant is running hot, the venue is only at half capacity)," wrote Bault, Naklicki, and Gifford. "This could allow insurance to be metered like a utility, and at different rates depending upon exposures and intensity."

Further developments — like tailored risk-management training and the ability for companies to shop individual elements of their business to different insurance firms — could also follow.

This would be a multistep process, because laws need to change to allow insurance to exist in this manner. Insurance, in the workers' compensation field, needs to be able to rate individuals, not companies. Individual risks will be more granularly assessed, and actuarial models will be created on the personal level.

There doesn't need to be confining job descriptions along with their respective class codes and risk ratings - the actual work that truly does pose a risk can be singled out rather than rating at the highest level of risk an employee might engage in, even if they don't do that activity but 10% of their work exposure.

Professional Employer Organizations and other temporary employment systems will benefit immensely, as will their insurance companies. Opt out may not be relevant any longer.

Oh, and uninsured employers would no longer be able to hide so long as a worker is "wired" to the Feed.

Sports wear vendors are already embracing embedded technology and building it into their clothing.

Privacy? pffft - I think darn near any employer will accept a lower price for engaging in the system more efficiently, and workers will just have to accept that as a part of their employment, or work elsewhere.

In fact, such IoT implementation may actually work to engage and retain employees, something the learning community calls "gamification."

The Feed portends disruption to the insurance market, and work comp is a natural fit. This isn't the Yukon Gold Rush. It's more like Skagway's tourist rush.

We're just scratching the surface. This industry is going to look a lot different in 20 years, or sooner.
Posted by Unknown at 4:43 AM