Give 'Em What They Want

The stories that have thus far been published by ProPublica, and the report issued by OSHA, had attendees at the Workers' Compensation Research Institute's annual conference upset.

The professionals I talked to take these reports as personal attacks on their integrity and professionalism, and the industry in general.

Indeed, one could take these papers as such, but take a step back for a moment and "listen" to what these critiques of workers' compensation are really saying.

First off, the OSHA report is no more than a recitation of prior studies and other publications on the effectiveness and fairness of state workers' compensation systems. There is no new information presented in that report. Everything that's been said in that report has been published before (citations are found in three full pages of footnotes from 13 to 16).

The Pro Publica report had been researched for about a year, and focuses on illogical variations in benefits, the decline over time of statutory benefits, and bureaucratic benefit delivery systems that imply a cultural bias. The conclusion is that workers' compensation is not a universally applied concept and that state programs vary significantly in the benefits provided.

Both reports seem to imply that the federal government should step in and at least mandate minimums, if not take over programs completely, because the cost of taking care of injured workers is increasingly being borne by the general taxpayer through other governmental benefit systems.

But here's the deal - roughly 80% of all claims are handled without discord, without dispute, and injured workers get back to the job.

The other 20% are where the problems lie, and those generally are either litigated cases where a dispute arose, or confusion ensued, or are catastrophic claims, or a combination. Almost half of these cases are litigated and make up over 75% of claim costs overall (at least in California, but most states cite similar statistics).

If anything, more often than not, a big chunk of this 20% are the product of poor communication and anxiety on the part of the worker: what's going to happen next and how am I going to pay the rent, feed the family?

I think of Dwight Johnson's story and how better communication could have eased anxiety, although eventually (with the help of his attorney, retained ultimately because of communication issues) his case was handled expertly.

Workers' compensation has never been perfect - it can't be. The system covers too many people in too many different situations with broad brushed strokes of benefits that are general in nature. It's one size fits all, so outliers don't fit in very well.

Charles Davoli is a Louisiana claimant's attorney, serves as a labor representative on the Louisiana Governor’s Workers’ Compensation Advisory Council and also serves as Secretary for the Louisiana Workers’ Advocates (LWA) organization, which is a Workers Injury Law and Advocacy Group (WILG) chapter member.

“There’s a death rattle going on in workers’ compensation,” Davoli told the audience during his session at the WCRI conference.

Citing pending constitutional challenges in Florida and Oklahoma, Davoli told folks, “We may in fact be perpetuating something that has outlived its purpose.”

In State of Florida v. Florida Workers’ Advocates the Florida 3rd District Court of Appeals is reviewing a Miami-Dade County judge ruling that, because the grand bargain had been breached over time through legislative "reforms," the exclusive-remedy provision of the state’s statute is unconstitutional.

In Oklahoma, the state's Supreme Court has been asked to review the cases of Duck v. Morgan Tire and Pilkington & Lee v. State of Oklahoma about exclusive remedy and the constitutionality of the “Oklahoma Option,” respectively.

Chuck's talking about the noise in between the employer and the employee...

We have reporting coming out of think tanks, like WCRI, with lots of data demonstrating gross trends, that seem to contradict, or at least are difficult to coordinate with, the ProPublica and OSHA reports.

These data reports in general are missing three important things:

Second, hardly any researchers seem to discuss any preliminary findings with practitioners and workers; at least they don't report these conversations. 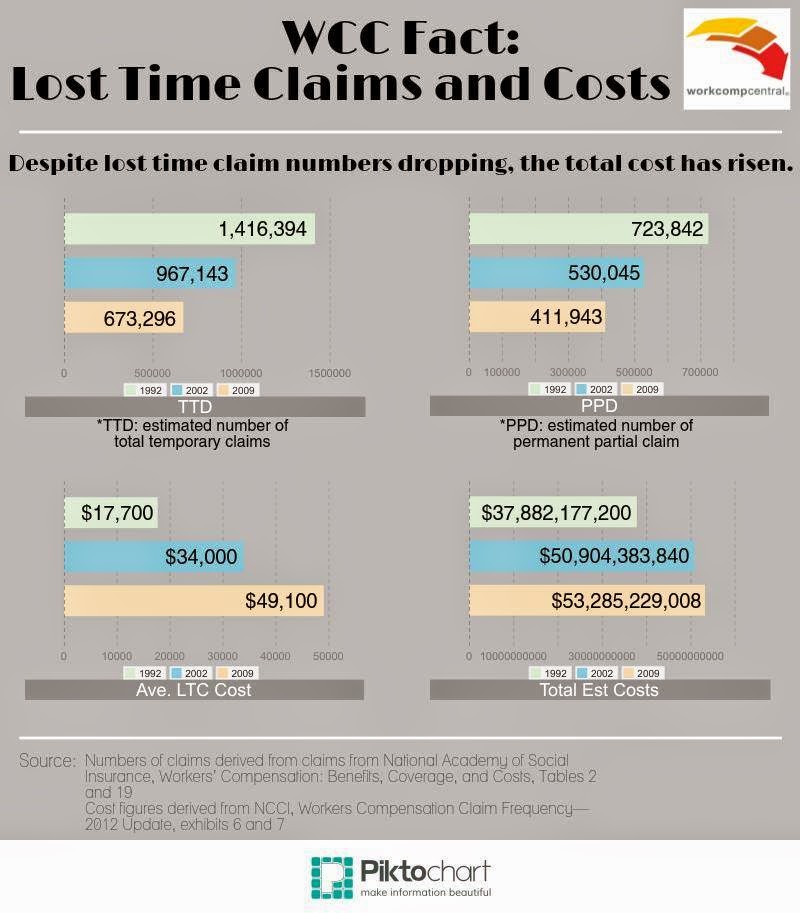 Third, little of the research appears to ask the question, “How are we doing?” with respect to protecting workers from adverse financial impact of injury.

Yes, different states and systems handle various parts differently; those are legislative issues and perhaps the criticisms of workers' compensation as far as disparity in treatment of various benefits has some foundation. After all, my body doesn't change when I cross the border from California to Arizona, or beyond.

But at least with respect to current operations, problems lie not in the system itself but in the execution of the system.

When it all comes down to the bottom line, the answer lies with the employer - no one else.
Employers, particularly smaller businesses, rely on their insurance company to handle claims. Too many take a hands off approach and don't actively manage their insurance companies, and don't actively engage with the injured worker to ensure he or she gets what was contracted for under the law.

How many employers (I'm not talking about self-insured, self-administered employers - these are folks that have already figured it out) in your hundred count case load can you say who:
My bet is you can count them on one hand in your hundred plus case load.

We focus on lots of little details because there's a bean count at the end of the day, but all too often we're counting the wrong beans.

This is just business math. Sort the Profit & Loss ledger in descending order. If you can eliminate ‘Postage’ completely, for instance, but it consumes only 0.0034 percent of the budget, you're focusing on the wrong thing.

Attack the largest line item – litigated claims. Give the injured workers what they want and what they are entitled to – sometimes even if they are wrong (misdirected opiates excepted - but authorize rigorous physical therapy instead, for example).

In the old days the mantra was "close the claim." Let the employee and employer move on with their respective lives.

That mantra is still repeated, but we have thrown up many roadblocks to that end goal chasing 'Postage' costs - but they don't have to be there.

There are options in state law that allow us not to send a case to utilization review, for instance - the claims adjuster is the first UR. We don't have to send an investigator to interview every claimant that had bilateral amputation of the lower limbs to see if he really is disabled (sheesh). Not every medical vendor is trying to cheat - most just want to be paid fairly for their time and services.

The criticisms are about that 20% of all claims that become problematic, usually through a failure in communication and failure to manage expectations.

So communicate gently and peaceably. Let both the employee AND the employer know what the steps are, who will be talking with them and why, and what is or is not allowed under the law both short and long term, and what is expected of each of them as ACTIVE participants.

I still believe that what we will have in 10 years will be markedly different than what we're doing now, but in the meantime we owe society the best that we can provide. Sometimes that means doing things differently, and perhaps against our instincts.
Posted by Unknown at 4:48 AM