Because I was in Oregon last week for a presentation to claims pros for Reinisch Wilson Weier law firm's annual claims training, a case reported this morning in WorkCompCentral news caught my eye because it involved an aviation accident in Oregon.

Actually, I remember when this accident happened.

The pilot was Jason Ketcheson, 36, of Cannon Beach, OR. He worked as a sales representative for Wyndham Resort Development Corp., a time-share company. Ketcheson held commercial pilot and instructor with instrument ratings privileges.

On the day of the accident Ketcheson rented a Cessna 172, a plane most current pilots are familiar with because they are used ubiquitously for training. Depending on the year a 172 is built the aircraft might, or might not be, certified for instrument flight conditions (i.e. where you can't see and have to rely on an aircrafts instruments for safe flight).

Frank Toohey was Ketcheson's supervisor. Toohey selected Ketcheson to assist him in a training session in Klamath Falls. The plan was for them to fly to Klamath Falls in the rented Cessna piloted by Ketcheson out of Seaside, OR.

According to a Claims Journal story on the accident, National Transportation Safety Board investigator Van McKenny wrote in the preliminary investigation report that Allen Sprague, the owner of Aviation Adventures and the Cessna 172 rented by Ketcheson, said after the crash that he had been concerned about poor decisions made by the pilot.

“Mr. Sprague said that he had some concerns about letting the pilot continue to fly the airplane after he had returned from a trip with a very low level of fuel remaining,” McKenny wrote. “He discussed with the pilot decision making and ran through some scenarios to make sure the pilot was making consistent and safe aeronautical decisions, and to make sure … ‘his head was in the right place.”’

The crash occurred in heavy fog, although Sprague said he had given “strict instructions that the plane was only to be flown out of Seaside when the weather was VFR,” or visual flight rules. That means the weather is clear enough for a pilot to see where an aircraft is going. Sprague also warned Ketcheson that passengers were prohibited.

The plane crashed after take off into a house killing Ketcheson, Toohey and three people in the house. The graphic in this post is from the NTSB electrical engineer's investigation report from data downloaded off the Garmin GPS instrument that was aboard the plane, overlaid on a Google Earth graphic. It shows the flight path of the plane. 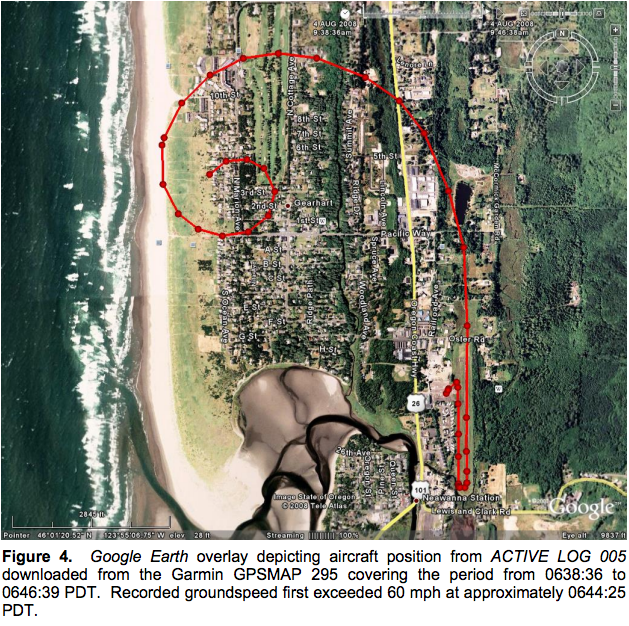 The NTSB final report blamed disorientation on the part of the pilot while in instrument meteorological conditions (i.e. fog).

The Oregon Court of Appeals ruled on March 4 that the family of Toohey was barred by the exclusive remedy of workers' compensation from bringing a wrongful death suit against the estate of Ketcheson.

The trial judge had found that both Toohey and Ketcheson were Wyndham workers acting in the course of their employment at the time of the crash, and thus found Toohey's death arose out of his employment. As such, the judge said, the comp system provided the sole remedy for Toohey's family.

Toohey's family appealed arguing that because Ketcheson was not a pilot for Wyndham at the time of the accident that exclusive remedy did not apply.

The Court of Appeals disagreed.

The "risk of a plane crash is precisely the type of risk created by employment when an employee conducts work-related travel by plane."