When my wife and I were in Kentucky last month for the Derby, we took a day out to visit Pleasant Hill and the Shaker Village.

Over 3,000 acres with 105 years of history are contained in 34 surviving structures, many of them hosting exhibits.

One exhibit was about the history of William F. Pennebaker, who ultimately was designated a medical doctor after being sent to Cincinatti, OH to get training so the village could have its own medical servicing.

Pennebaker was known to be quite a character, but was also hailed as one of the more learned and read men in the village.

On display was a representation of an actual clinical note regarding a great new medication Pennebaker, and his mentor, S. Tripp, M.D. Pleasant Hill, Ky. that was published in the Bayer's Pharmaceutical Products catalog of the time (1902) on benefits in the prescription of heroin: 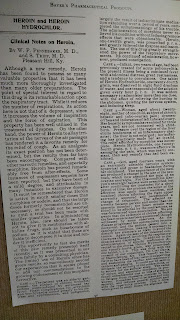 "Although a new remedy, Heroin has been found to possess so many valuable properties that it has been much more thoroughly investigated than many older preparations. The point of special interest in regard to this drug is its remarkable action upon the respirator tract. While it reduces the number of respirations, its action here is not that of a depressant, since it increases the volume of inspiration and the force of expiration. ... On the other hand, the power of Heroin to allay irritation of the nerves of the air passages has rendered it a favorite remedy for the relief of cough. ... Compared with other narcotic remedies, and especially morphine, Heroin has proved remarkably free from after-effects. Some instances of unpleasant sequelae have been reported, but they have been of a mild degree, and attributable in many instances to excessive dosage."
...
"In administering Heroin, also, care should be taken not to give it in combination with alkaline drugs, such as bicarbonate of sodium, as it is state that these are liable to decompose it in time and render it inefficient."
...
"The opportunity to test the merits of this new remedy presented itself recently, as it was prescribed in our own family by a consulting physician. The limited use of Heroin since has given results so marvelously beyond our expectations that it seems proper to add our commendations to the growing endorsement of this morphine derivative."

What was known then about opiates by the physician population isn't much less than now, at least according to the sessions in the National Rx Drug Abuse & Heroin Summit that was held in Atlanta, GA earlier this year.

At The Summit, one of the presenters said, matter of frankly, that "what we have found is that many of these people end up just opting out of life..."

Claim administrators in the Third Party Payer track said they were seeing a 30% use of opiates in their claims compared to 4% in the general health population - but remember that general health is a much larger population than work comp, and the story I was hearing was that many come through the general health gateway because physicians simply aren't well trained on opiates.

There was case study after case study about intervention in claims - some of the patients were resistant, but more shockingly, more of the resistance came from the medical community itself, mostly because of the fear of taking long term opiate use away and the potential for adverse effects.

The sinister part of opiates is that people don't realize the fog they live in. The effects take hold subtly, discretely, until the patient believes that the drugs are necessary despite the adverse consequences of altered thought and personality.

Dependency masks itself as fear.

One presenter, a chief pharmacist for a claims administrator, toured California to talk to doctors.

Her mission was to go visit the physicians and show them how bad opiates are, and how errant prescriptions could put patients at greater risk of adverse health consequences. Some took the advice, he said, and didn't realize what they were doing until shown the data.

Others screamed at her and kicked her out of the office.

And there were some that were obvious pill mills with cameras everywhere and the physicians didn't care.

Her take away - no one was holding the medical community accountable.

We have seen some of this change as some doctors have been sent to jail for injudicious prescription of opiates. Others are fighting indictments and civil complaints.

Accountability is starting to permeate the medical community with the help of law enforcement.

The claims community is opening up too, seeing alternative treatments, drug rehabilitation and limited psychological services, as pathways out of the opiate liability stream that was opened up in the first place because dosages, that produce the "after-effects" and "unpleasant sequelae," were not well monitored.

In time, the "opiate crisis" in work comp will abate.

And likely be replaced by some new concern...

114 years of accumulated knowledge, and we still have much to learn.
Posted by Unknown at 4:19 AM

Email ThisBlogThis!Share to TwitterShare to FacebookShare to Pinterest
Labels: opioids