Some of my friends and colleagues are traveling to or are at the NCCI Annual Issues Symposium in Orland, FL.

The AIS is the national work comp data wonk-fest. Lots of information about how the business of workers' compensation insurance is doing around the country. It's an important event because without insurance, work comp can't function. Even the last couple of monopolistic states performance is measured, and that's interesting because it provides a comparison of private capital versus public capital.

I won't be there though. Instead my wife and I are headed to Kentucky to watch the 142nd running of this race.

We'll see the best that KY has to show of course, and thanks to the good folks at Ascential Care in Lexington for helping put our trip together.
The Artist Known as Dwight (double amputee from 2 separate work injuries 18 months apart) designed and made our Derby wear. 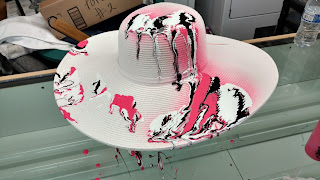 What we will see - the spectacle, the money, the party - of course, is in stark contrast to the reality of the rest of the state. High unemployment in the coal mining region and one of the highest rates of opioid addition in the nation bespeak a state with a very fragile economy and susceptible population.

In addition, as our Special Report on KY demonstrated, that edge of poverty is made even more sharp when a work injury occurs.

KY has also garnered the attention of the Workers' Compensation Research Institute, which has added the state to its CompScope reporting.

Last Friday the state Court of Appeals ruled that an injured worker does not have the right to have her father attend an independent medical exam, and as a consequence of state law, forfeits her temporary total disability benefits for the period of refusing the IME.

Oh, and it's the state's 100th anniversary of its work comp system.

Perhaps its coincidental that my attention is drawn to KY with all of this, perhaps it is serendipitous.

In the face of such troubles though The Derby and horse racing in general is something KY is proud of and the citizens put forth their best while the world watches.

I'll learn how to fit a bowtie, Anne will wear her Dwight hat, we'll drink mint juleps from silver cups and 20 horses will thrill thousands for a couple of minutes. It's a once in a lifetime experience.