I'd been through this once before.

I met with Carl, the hospice advisor, at Mom's facility yesterday and we went through the benefits - what is and isn't included. It was only a little more than 2 years ago when I was briefed on hospice for Dad, and most of it I recalled.

Nurse Margaret was the evaluating nurse. We went through Mom's medical history. Margaret called me later yesterday to advise Mom was eligible for hospice services and they would start immediately.

The chain of events that got us down this path started Saturday when my sister visited Mom and found her ill - her temperature was 101.9 and she was shaking, lethargic, tired and non-responsive, a radical departure of status from my visit just the day before when she seemed her normal, demented, 91 year old self.

Conservative treatment controlled the fever. Mom has had a respiratory infection for, it seems, a month, without resolution despite antibiotics and other treatment courses. 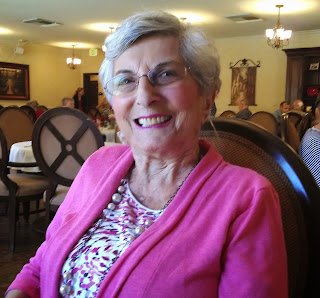 The doctor would see her Monday, and advise continuing the conservative treatment.

Tuesday the nurse in charge called me to say that Mom seemed to take a turn for the worse, and requested authorization for a hospital visit, which I granted. But the medical staff at the hospital found nothing extraordinary or unusual - vitals were normal, exam was normal, and referred her back to Mom's facility.

But Mom's physician recommended an hospice evaluation... That usually means the end of the line is near.

So Forty One Mike conveyed me south Wednesday to check on Mom and meet with the hospice team.


Mom was not doing well. I got there about 11:45. She was in a wheel chair at a table in the dining area with oxygen (she had been on supplemental oxygen for months now due to inadequate O2 uptake).

She, of course, was happy to see me, but any laughter induced coughing. She enjoyed being massaged above the shoulder blades when coughing. Her hands appeared more swollen than usual, and purple. They were cold and she could not open them or close them very well.

I held at least one of her hands the whole time there - she enjoyed that.

But now Mom has tremors anytime she attempts any sort of muscular control, whether moving her arm, legs, whatever. She was not talkative, very unusual for Mom. She didn't smile much either - again, very unusual.

She seemed more unsure of things, and was very tired. The caretakers said she ate a little bit for breakfast. Lunch was meatloaf, noodles and green beans. I fed her. She ate about 20% of her meal and a couple of spoons of ice cream. She drank all of her water (with a straw).

She is not able to feed herself because of her lack of muscle control. She does not have a fever… After lunch she went to bed and I met with Carl and Margaret.

It was a really rough day for Mom. Is she dying? Perhaps. I’m not a doctor. But I do know that she won’t be able to carry on for long in the condition I saw her Wednesday.

You know, I write something nearly every day about workers' compensation.

It really doesn't matter much though. We think it's important, and perhaps on a grand, universal, social and economic scale it has some import.

But not in comparison to those acute reminders about life.

The process of death has a clarifying effect. Death itself is inescapable. We all know that. We tend to mute that reality.

Presumptions, utilization review, drug formularies, profits, losses, provider networks, fraud, compensability - at the end of the life, the only thing that really matters is having a beer with your family members in the garage, tinkering with motorcycles, preparing the grill, and reminiscing about childhood.

Mom's a great-grandmother now. She doesn't really know it because of her dementia. And it's unlikely she'll ever really "see" her great-grandchildren because they're just babies.

At 91, nearly as old as workers' compensation in this country, every day is an adventure and you never really know what the next day holds.

I hope when I see Mom again on Saturday she will smile at me and that I can warm her hands in mine.
Posted by Unknown at 4:20 AM