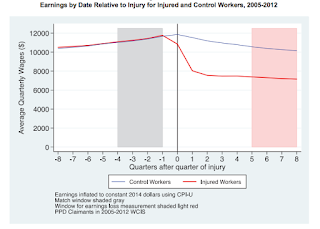 One of the biggest challenges in engineering a workers' compensation system is addressing fairness.

Not only must the balance between how much an employer pays to ensure its workers have injury/illness protection to address, but also disparity between beneficiaries themselves - in general higher wage earners are less impacted by the disruption of an injury or illness than lower wage earners; those earning more have a greater ability to compensate.

A lot of states address this later fairness issues with some sort of progressive benefit system - the more you earn the greater your weekly benefit amount, up to a cap at which point it's assumed that one earns enough that there should be some savings or other financial backup to address any loss of earnings.

Even though a system design may address benefit fairness, execution may be lacking - a point made last week when it was revealed that California's $120 million supplemental return to work fund had hardly paid out any money relative to its forecasted need.

From 2005 to 2012, permanent disability benefits on average replaced 58.8% of workers' earning losses as a result of injuries, according to the report. But if measured under SB 863's benefit structure, indemnity benefits would have replaced 76.8% of lost earnings.

But one of the most important aspects of SB 863 for low wage earners is the supplemental return to work payment of $5,000.

WorkCompCentral reported on Friday that since the Return to Work Supplement Program went live in April 2015, it has issued just 3,955 checks for $5,000, paying out a total of $19.775 million 10 months into the program.

California has one of the most complex systems for determining and delivering indemnity benefits - the purpose of that design was to increase fairness across worker economic levels.

Based on Rand's research, the California design can achieve greater equity than other programs without that complexity.

But execution is another matter - with complexity of design comes complication in execution: disputes arise in determining impairment, allocating impairment across injury liabilities, applying for a supplemental payment, etc.

Fundamentally, workers' compensation can not be everything to all people.

For those living paycheck to paycheck, though, it IS everything. The real bottom line (see the Rand chart): get hurt at work and your post injury earnings go down...

The Rand report is here.
Posted by Unknown at 4:40 AM