As Much As We Can 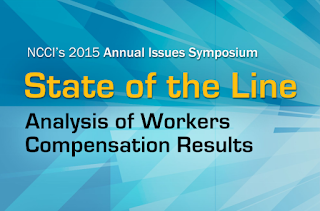 It's about the business of workers' compensation insurance, very simply, and its relative health in comparison to other insurance lines, and other industries.

Lots of numbers are thrown about because that's what insurance people look at.

And that's important. Because without insurance companies then the whole premise of workers' compensation, spreading the risks through some financially viable means (i.e. the cost of risk) doesn't work.

So having a vital insurance industry backing the system is hugely critical to the concept of work injury protection.

The private carrier industry posted a 98 combined ratio, which was the first time since 2006 that it was under 100.

Very simply, a combined ratio of 98 means that for every dollar of premium taken in during the measuring period, 98 cents goes out the door as costs and expenses. I believe that the combined ratio is a misleading indicator of insurance line health, but it is commonly and widely used by the investment industry so it gets a lot of attention.

But Klingel advised that this "great news" won't last long, that the industry has seen these trends before and that the path ahead is "turbulent."

There's a lot of variables that impact what the risk of work injury protection costs, but here's the bottom line - it's going to cost more and more over the next couple of years.

There are several factors that come into play, but the most important factor is a continuing trend of low interest rates, which the actuaries and economists at NCCI don't see rising anytime soon despite what the Federal Reserve says.

These low interest rates mean that the insurance industry, which invests largely in conservative vehicles such as Treasury bonds, won't reap the same profit margins from investments as they had with previous investments that are now maturing.

The money has to come from somewhere to keep investors happy, so the only other income avenue - selling the product - needs price increases.

Other challenges facing the insurance industry include the uneven economic recovery; not only has the United States economy been slow to recover from the Great Recession of 2008, but different sectors are growing at different paces for various reasons.

Sectors that are most important to worker's compensation, because of payroll growth and risk categories, such as trucking and construction, are seeing tepid growth, and in certain cases are seeing big changes due to technology.

In fact, manufacturing, which once was a staple underwriting class for work comp carriers, won't ever recover, at least not from a payroll perspective, because many of the jobs that were jettisoned in the recession are being replaced by robotics.

Outsider Salim Ismail, a former vice president at Yahoo and an extraordinarily smart guy, gave attendees an exciting, but at the same time frightening, perspective on how fast technology is growing, and how quickly this world is changing as a result of the Information Revolution.

Ismail showed the exponential curves associated with disruption, and believes (very convincingly so) that we've only just begun; the legal and regulatory frameworks are reactive rather than proactive, largely due to entrenched interests, and are going to remain far behind where this world is going.

I came away believing that while there is going to be an employment shift, that shift will be towards more technical jobs requiring more skills and paying more money - and there will be a lot of those jobs coming on line providing plenty of job opportunities for the displaced.

There is going to be, however, a population that won't, or can't, make that move and what I fear is really going to happen is that the gulf between the "haves" and the "have nots" will widen.

The bottom line in my opinion is that there is going to be a huge demographic that is going to be left behind for one reason or another and it's going to be society's big job to figure out what to do, and how to support, that population.

And it isn't going to be pretty.

Much was made about the "on demand economy" and how the Ubers of this world are redefining the work place.

We've heard this before at the beginning of the dot com cycle, and actually that argument has preceded virtually every economic shift.

In the dot com world, the argument was that the typical office-based worker has new freedoms to work wherever, whenever and however they feel, and that this will be empowering greater productivity and satisfaction.

What we have learned (and what I have experienced first hand) is that for some people and jobs, that is true. But the fundamental "pack animal" instinct of humans still favor an office where people gather, collaborate face to face, and leave their work when they're done for the day so there's some sanity at home...

I'm a simple, liberal arts kind of guy - that's why I became a lawyer. All of these numbers are confounding, confusing, and challenge my underdeveloped left brain.

And maybe they can't be reconciled. These are left brain versus right brain concepts. Different people are good at different things.

I think most of us try as hard as we can to get it right as much as we can.
Posted by Unknown at 4:39 AM

Email ThisBlogThis!Share to TwitterShare to FacebookShare to Pinterest
Labels: NCCI