Usually the debate in workers' compensation about the aging work force concerns employment risks of orthopedic based injuries or other associated, easily identifiable, age-related maladies.

But there's a larger issue looming that affects more than just the aged worker: Alzheimer's and dementia. The diseases are related, but different.

And these diseases can be lurking in any worker, are not relegated to just elderly people, and frankly create both risk, and opportunity.

I think I've become more numb to the possibilities of Alzheimer's and dementia affecting the work place because of Mom's placement in a memory care facility nearly a year ago. Visiting twice a week or so, I've come to know many of the residents, and their primary-care family members.

There's Richard #1. Richard #1 is about my age, maybe a little younger. He's in his own little world. Most of the time his face is blank, eyes are opaque. It doesn't seem there's much going on there. He's about six feet tall, so he can be imposing, but most of the time he is hunched over.

In his former life he was an executive, and volunteered for an outdoor rescue department in the mountains - an "occupation" he loved and pursued whenever he could get away from the desk, his attentive wife, Grace, tells me.

Grace lives nearby, so she visits nearly every day at the lunch hour to help feed Richard #1, walk him about, and give him unbelievably loving care.

Richard #2 has nearly an impressive resume - an engineer in the past, he too is nearly six feet tall, but can't walk by himself. #2 carries the same blank face, same distant eyes, same vacant demeanor. Marsha, his wife, is there every day to feed him, provide some comfort, walk him around for some exercise.

Tommy (TJ) retired as a Marine Master Sergeant. Then he went to the Secret Service where he was assigned personal protection duties to, ironically, President Ronald Reagan. There's a great photo of TJ and President Reagan shaking hands as TJ received a commemorative from the president.

Mom's roommate, Bente, is a widow; her husband was a Danish diplomate. Bente has traveled the world socializing with heads of states from countless countries.

Some of the residents don't seem like they belong there ... until you talk to them.

Jimmy retired from the Santa Ana Fire Department a few years ago. I don't know his age, but he can't be much older, if at all, than me (55). He's got a gut! And he always, always, wears a San Diego Chargers ball cap. He seems lucid, can carry on a conversation, and can remember some details.

But then, every few minutes, he'll say something that you know isn't correct, you know doesn't make sense, and just seems to be a thought out of left field.

JoAnne and her husband Lloyd seem like regular folks. They are both residents, are always smiling, always quick to engage in conversation. And then they start talking about "coming down stairs" (the facility is a single story building) and "going out to the restaurant", etc., there's an understanding of why they are both living in memory care. JoAnne and Lloyd are in their eighties.

I thought Peggy was a caregiver or other worker at the facility. Peggy seems perfectly normal. She dresses appropriately, walks fine and without assistance, seems to engage socially. I would guess her age as around 60 - she's not old and in fact I could imagine her still at work.

But, again, when you converse with her, Peggy will communicate a thought that is not of this world, or perhaps any world other than what's going on in her head. 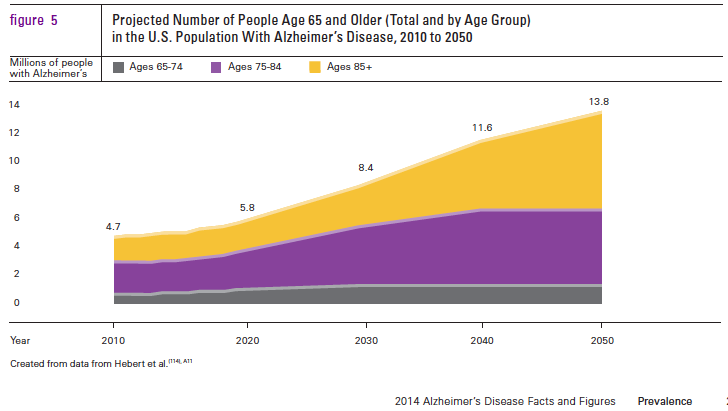 Alzheimer's and dementia are insidious. They sneak up on the victim. We all tend to forget things as we get older, but these diseases aren't about forgetfulness; they cause disruptions in the thought processes, both autonomous or dependent thinking.

And while these diseases are more commonly associated with the elderly (Mom's first indication of dementia was probably about 10 years ago at age 80), these diseases can afflict those still working: it is estimated that one in nine people age 65 and older (11 percent of the population!) has something going on associated with Alzheimers and dementia.

Since these diseases are so insidious, the Alzheimers Association estimates that nearly half of the estimated 5.2 million Americans go undiagnosed.

Women are at greater risk than men, the diseases are more commonly associated with less education (though the folks where Mom is at defy that - but that may be because the facility is "high end" and expensive, so those of less education may not have the means).

According to the Alzheimers Association, there is a wave of victims about to be afflicted and by 2025 the number of Alzheimer and dementia patients is estimated to be 7.1 million - a 40% increase from the approximate 5 million today.

There are two huge impacts: those still working while the disease progresses, and those caring for the people who have been diagnosed.

Workers' compensation certainly isn't going to be called upon to pay for the care of those with Alzheimers or dementia in the work place, except for those with a connection to brain trauma such as football players or workers who sustain a head injury - but the liability of unrealized self-harm (falling, tripping, picking up something hot, fighting, etc.) is real. Is that person just forgetful today? Or is there something more going on?

And what about apportionment to some pre-existing disease process or co-morbidity? Certainly fodder for litigation...

There are caregivers that are paid, such as at Mom's facility, but there is a huge population that is not paid, and for whom caregiving is a second occupation. This affects the work place behavior and performance.

Paid caregivers face obvious risks: lifting, being hit or physically assaulted, and other such dangers. There's the emotional toll too - being in the memory care environment all of the time gets depressing, and caregivers become attached to their wards.

I don't have an answer - heck, I'm not even sure what the question is! It seems to me, though, that one of the exit legacies of the baby boom generation is a very large population that will place a much different burden on work place risks and, ergo, workers' compensation.

At best, all I can say is that I think there's a huge impending issue that we're not ready to address.
Posted by Unknown at 4:50 AM