The weather for San Diego tomorrow through the weekend is forecast to persuade nearly everyone from attending the Annual California Applicants' Attorneys Association Winter Conference today through Sunday:

Of course I'll take my bicycle - after all San Diego is where I got started cycling in college, so it's almost a homecoming for me, pedaling Mission Boulevard out to La Jolla and up Pacific Coast Highway.

I am on a panel presentation at the CAAA conference. Fortunately my panel is really late in the afternoon so I can enjoy some of that great weather on two wheels.

The flip side is that the panel is the last presentation on Friday, starting at 5:05 p.m. and ending into my cocktail hour at 6:20. But I think that attendees will remain awake for the "Great Debate" because not only are we going to tackle some very interesting, timely issues, but the panel is a first, I believe, for CAAA with employer and defense representation.

On the panel with me are:

Of course you know that we'll be debating SB 863 and whether or not that landmark reform bill is meeting expectations, the impact on various affected groups including the primary stakeholders of employers and injured workers, and what we would do differently if we were the work comp czars.

All one need do to get my perspective is what you're doing now - read my blog. You know that in my opinion, so far, SB 863 has not delivered on its promises to insured employers.

Self insured employers, however, seem to have reaped great benefit. Nearly two-thirds of SB 863 "reformed" self insurance to make it easier to comply and maintain, and the reports I'm hearing so far is that self-insureds are very happy with those provisions.

But the story is different for other segments.

Injured workers got a pay increase, but even more red tape getting medical treatment.

Physicians and other medical vendors thus far are encountering an equal amount of red tape, and the anecdotal evidence is that the physicians who really do good work are exiting, leaving room for the more profit minded docs for whom the Hippocratic Oath was merely a recitation.

More money is going into cost containment services, or at least more of it is being reported as diverted to those services.

There are still many provisions of the bill that are still pending regulatory implementation - but the changes instituted by SB 863 were so broad and vast that it stretched the resources of the Division of Workers' Compensation despite an increase in funding and staffing.

Copy services, interpreters, and injured workers with decreased earnings still don't know what the final word is on elements that affect them, impinging cash flows.

Vendors that relied on the old system of filing liens to preserve reimbursement claims have had to come up with alternative methods of collections - and this has greatly reduced the expense of adjudicating those claims. 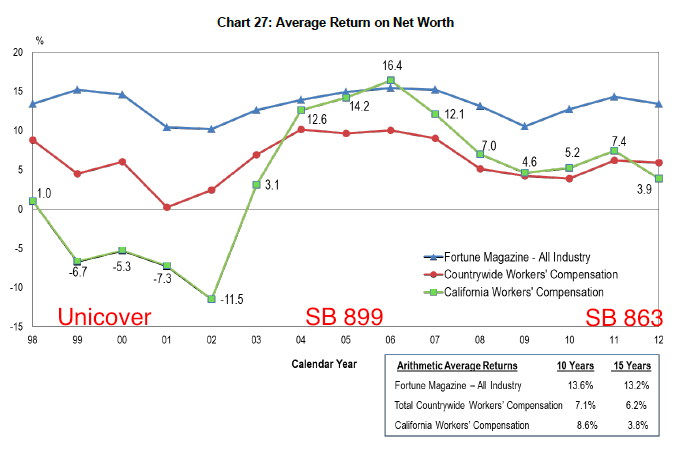 Employer rates have still gone up, and so have premiums. Carriers are still making money and the California market remains near a quarter of the entire nation's written premium.

It's easy to say that SB 863 hasn't delivered on its promises - promises that should have saved the California system a half billion dollars in the first year but didn't.

It's also easy to say that we still need to wait and see, as participants adjust to Independent Medical Review and other provisions that shocked the system.

And what if I were czar? What would I do?

1. Return to 1992 and the Minimum Rate Law - I think that Open Rating was the worst thing that could have ever been invoked on the California work comp insurance market.

2. Restructure Audit Unit regulations so the Unit can actually fine and collect from carriers and Third Party Administrators that fail to meet standards; right now the Audit Unit is laughably impotent.

There you have it.

Come to the session so you can hear what the other 5 on the panel have to say. Or just read WorkCompCentral and/or this blog tomorrow morning (and Monday too).
Posted by Unknown at 4:32 AM