As the Ebola scare was developing there was speculation about the applicability of workers' compensation to such cases.

Now that 2 nurses have contracted the disease from occupational exposure the debate is not about AOE/COE, but how far this is going to go.

The first nurse, identified several days ago by friends and family as Nina Pham, was in “clinically stable” condition, and in isolation at Dallas’ Texas Health Presbyterian Hospital, where she helped treat another Ebola patient, Thomas Eric Duncan.

We now have two nurses who have Ebola.

The second health care worker also cared for Duncan and was immediately isolated at Texas Health Presbyterian Hospital, the Texas Department of State Health Services said in a statement.

“Health officials have interviewed the latest patient to quickly identify any contacts or potential exposures, and those people will be monitored,” the department said.

This second nurse case apparently traveled back and forth from Cleveland, Ohio before showing symptoms, which officials say indicates she likely was not contagious at that time, but nevertheless precautions are being taken to reduce the risk of transmission to others, such as taking one of the planes out of service and contacting all passengers and crew members.

A total of 78 healthcare providers at the hospital treated Duncan. Up to 48 other persons were exposed to Duncan.

I read a commentary a couple of days back that basically concluded that there was no workers' compensation risk from Ebola because a disease, to be compensable, must be a unique exposure for a worker - the author comparing Ebola to the flu.

Ebola, is far, far different than the flu because it is basically fatal; the flu might be fatal but more often than not one just feels lousy. The fatality rate in the current Ebola outbreak, however, is about 70 percent according to reports. 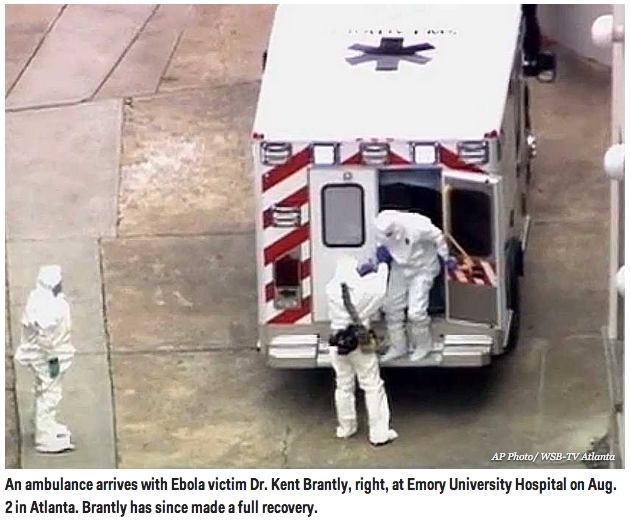 But is the workers' compensation system ready to deal with Ebola? And I don't mean from a claim severity or frequency standpoint.

I mean from the point of providing quality medical care in such a specialized situation - because there aren't too many medical professionals, or facilities (as demonstrated by infectious disease handling failures at Texas Health Presbyterian Hospital) that are trained, have adequate protocol (indeed even the Centers for Disease Control has been rapidly changing guidelines as this situation unfolds), or have the equipment to deal with this disease; ergo, this is a disease for which there likely is no fee schedule, likely no good treatment guidelines, likely nothing to give claim departments any guidance whatsoever.

Workers' compensation medical treatment has devolved into fights about utilization and other reviews which ultimately delays (though it's not supposed to) the delivery of care, if not outright denial of care; but dealing with Ebola requires immediate action. There is no time for utilization review or independent medical review. Protocol is lacking, and risk of spreading the disease increases exponentially with every single contact.

And forget about workers' compensation - the entire medical delivery system is proving incapable of dealing with the disease, from the CDC on down.

We will likely see more Ebola cases from among the other healthcare providers who treated Duncan.

I worry about the spouses and children of the healthcare providers.

I also worry about Ebola spreading to schools in the event one or more of the children on the hospital staff contract the disease.

More than 8,900 people have been infected with Ebola in the three countries, with more than 4,400 deaths, the World Health Organization said. The number of new Ebola cases in three West African nations may jump to between 5,000 and 10,000 a week by Dec. 1 as the deadly viral infection spreads, the WHO said.

There’s no cure for Ebola, which jumps to humans from animals such as fruit bats and chimpanzees. The virus spreads from contact with bodily fluids such as blood, vomit and feces.


The way medical care in workers' compensation is delivered creates a real, and significant, national health problem when confronted with a potential pandemic like Ebola.

Work comp is woefully, in fact dangerously, inadequate for something as radical as Ebola.
Posted by Unknown at 4:22 AM